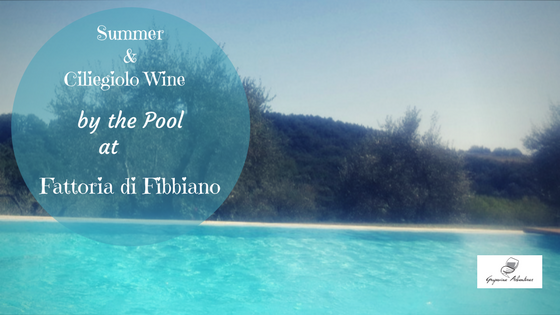 Sometimes it is good to dream back a bit to a summer day when you were sipping on Ciliegiolo wine by the pool in good company.

On this rainy September Sunday, where some parts of Italy has suffered heavy torrential rain and landslides, to not forget Hurricane Irma pulling in over Florida right this moment, I was sitting thinking back to the summer. More specifically, I was looking and sorting through the photos from the last few months.

Some of these photos were from an outing to Fattoria di Fibbiano in Terricciola, close to Pisa, with my friend and wine influencer Li Valentine, The Wining Hour, two months ago. Can you believe that two months have already passed…? It feels like it was just yesterday.

So, let’s dream back a bit to the summer on this rainy and a bit gloomy day…

Since some time, I had been in contact on social media with Geir Haug, a cool Norwegian who is in the wine business. He is a dear friend of the Cantoni family (the owners of Fattoria di Fibbiano) since many years. When he was coming down for a bit of holiday and staying at the agritourism of Fattoria di Fibbiano, he contacted me and we decided to meet on a warm and sunny Sunday in mid-July.

As Li Valentine was here in Florence during that period, I asked her if she wanted to come too. We were thus a fun and a nice mix of one Norwegian, one Swede, an American, and the Cantoni clan.

For those more hardcore Swedes or Norwegians who are into those jokes that are so typical of the love-hate relationship between Norway and Sweden, they would surely have a line ready here. However, after almost 20 years in Italy, I must confess I cannot remember many of those jokes anymore. And I never really cared for them much. 🙂

Matteo had told me that we should just relax and that I should take a day off from wine videos, photos, posts, etc. And I really did try, but still, I could not help myself from sneaking in a video and some photos. 😉 (See more about this below.)

Probably, I should not have written an article either 😉 but then I really wanted to write about their vineyards and their Ciliegiolo wine. Therefore, this seemed like a perfect occasion.

Anyway, it was a lovely day where we sipped on good wine from Fattoria di Fibbiano, had lunch together, stretched out by the pool, went for a swim, got a tour of the vineyards, and had fun. For Li, it was the first time she visited Fattoria di Fibbiano so I was happy to present her to Matteo and all the others.

A tour of the vineyards

The first time I visited Fattoria di Fibbiano more than a year ago, it had been raining heavily so it was not possible to visit the vineyards. When I returned there last summer, I did manage to have a look at the vineyards. It was fascinating to see the 120-year-old Sangiovese vines that are producing the grapes for their Ceppatella IGT Toscana wine. 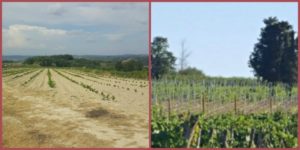 As that part of Tuscany used to be the bottom of the sea a couple of million years ago, the clay soil is very rich on fossil shells. In fact, you can see the shells everywhere in the soil and it is impressive to pick them up and get a closer look.

When I visited them in August last year, they had recently planted new vines of Sangiovese and it was interesting to see how much they had grown in a year. Last year, I took photos of the new plants but this year I actually forgot to take a photo close up. However, you can see the vines in the background of the photo above.

They are focusing on indigenous grape varieties, not only Sangiovese, but also Colombana, Vermentino, Colorino, Canaiolo, and Ciliegiolo.

The video here is from the tour of the wine cellar where Matteo explained the winemaking process to Li. (Geir was mostly hiding to not be part of the video.)

Fattoria di Fibbiano has launched its new 100% Ciliegiolo wine this year. Already in the early spring, I tasted this new Ciliegiolo wine in Livorno at a general tasting organized by Riccardo Gabriele. 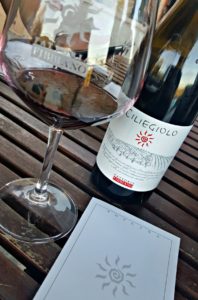 Then the red fruit, mostly cherry, and the freshness were the most dominant parts of this Ciliegiolo wine. In mid-July, it had already evolved and become much more structured with deeper and balsamic notes.

The Ciliegiolo is an indigenous grape variety mostly cultivated in Tuscany, Umbria, Le Marche, Abruzzo, and Lazio. The wine critic Ian D’Agata has defined it as one of Italy’s

“greatest but most unappreciated grape varieties”.

Often, it has historically been mistaken for Sangiovese as well as confused with other grapes such as Grenache and Aleatico. According to DNA studies, it has been shown that there is a clear parentage between Sangiovese and Ciliegiolo, the former being a progeny of the latter.

Even though I by now know the surroundings and the wines of Fattoria di Fibbiano, there are always new things to learn. Each vintage is, of course, different and thus you can never really ‘know’ the wines. The new thing this year is their Ciliegiolo IGT Toscana wine.

Another new thing was that I and Li met Geir Haug at Fattoria di Fibbiano this summer. Li then was introduced to Fattoria di Fibbiano for the first time. So it is definitely a place to feel relaxed at and where you make new connections and friendships…over a glass of wine!