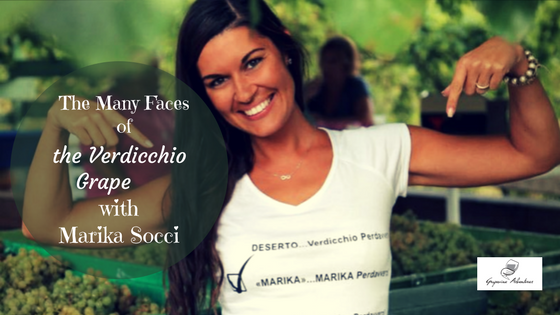 On July 11th, 2017, we went to Le Marche again talking about the many faces of the Verdicchio at #WinesOfItaly #LiveStream. My guest for the day was Marika Socci from Azienda Vitivinicola Socci in Castelplanio, Le Marche.

The special thing with this #WinesOfItaly #LiveStream was that it aired on a different time, in the afternoon here in Europe and in the morning in the US, to have Marika Socci live directly from the vineyard. This turned out to be a very cool initiative, as their vineyard is located very close to their winery buildings and is covered by wifi.

The leading grape variety here is, as you have probably already understood, the Verdicchio which is starring in all the wines produced by Azienda Vitivinicola Socci.

Marika Socci works at the family winery together with her father, Pierluigi Socci. Her grandfather planted the Verdicchio vines already back in the 1960s but in that period, they did not vinify or bottle the wine themselves but rather did it at the local cooperative. Further on, her grandfather decided to vinify and bottle the wine himself and thus started the family winery in 1973.

Azienda Vitivinicola Socci is situated in Castelplanio in the province of Ancona, which is in the middle of Verdicchio land, i.e. the district of the Verdicchio dei Castelli di Jesi Classico. The 3,5 ha (around 8 acres) of vineyard is spread out on the Mount Deserto hill on an altitude of 350 m.a.s.l.

Marika emphasized during the #WinesOfItaly #LiveStream that they are a small family run winery with lots of passion and dedication. The whole family helps out and they do everything themselves from the work in the vineyard to winemaking, marketing, selling, administration, and what else. They take pride in having a good relationship and “human to human” contact with all their clients.

The Verdicchio is a grape variety cultivated in Le Marche, on the hills of Jesi and Matelica. It gets its name from the greenish color of the grapes (green = verde). According to more recent studies, the Verdicchio is believed to be related to Trebbiano di Soave and Trebbiano di Lugana.

Marika defines Verdicchio as a powerful grape variety that gives wines with a great structure. She further on says that it is a sort of chameleon-like grape because you can work and vinify it in different ways with optimal results.

According to Marika, it is a wine that gives the very best of itself, with different nuances, in different situations. She says that it is a grape that can endure being experimented with, for ex. they are cooling the grapes for one of their wines.

Deserto they define as their “true” Verdicchio because it has the typical traits of the type of Verdicchio wine everybody are familiar with. Marika (as you might have understood, it is named after Marika) is a wine where the grapes, in their entirety, undergo a selective cryoextraction (the grapes are cooled down to -5 °C) and then pressed. This is to extract a must from the grapes that are richest in sugar and to extract the aromas that are typical for the Verdicchio. She defines it an atypical Verdicchio.

Martina (named after Marika’s sister) is the only one of their wines that do a short maceration on the grape skins. This gives it more immediate aromas that are recognizable for the Verdicchio grape. Last, but not least, Ousia is their sparkling wine made with the Champenoise method that they started experimenting with in 2012.

To learn more about these Verdicchio wines from Azienda Vitivinicola Socci, listen to the entire episode below of #WinesOfItaly #LiveStream.

Oh, and if you liked this type of wine content, don’t forget to sign up for my newsletter right here.