A couple of weeks ago, I went to Montalcino to visit some wineries in the search of Brunello wines with Li Valentine (TheWiningHour) and Laura McDonald. We were lucky to be driven around by my friend Riccardo Scarafoni from Cruises on the Road in Tuscany.

Laura had taken care of contacting the wineries and in that way preparing a good itinerary for us. We started out at Casanova di Neri and then, after lunch, we continued to Canalicchio di Sopra and Cantina La Serena.

Cruises on the Road in Tuscany – customized and comfortable tours

Some time ago, I got to know Riccardo Scarafoni from Cruises on the Road in Tuscany on a short tour he organized for my American blogger-friend Gina Zarcadoolas Martino and her husband Peter. Apart from the wineries, that I helped to select and contact, Riccardo and his back-office put together a nice three-day itinerary with a few other additional attractions.

The winery tour was the main thing for my friends, however, they also did appreciate the extra stops such as the Abbazia di Sant’Antimo and a quick course in cheese production at Podere Il Casale close to Montepulciano.

Riccardo is a very dynamic person with a long experience of working as a driver guide himself. Now, he has his own travel company and can help you put together the Italian tour you have always wished for. Whether it be wine and food tours, sightseeing, or more adventurous experiences you are looking for…he can surely help you. He operates mostly in Tuscany; however, he also organizes customized tours all over Italy and in southern France.

Riccardo has access to a fleet of very comfortable minivans with space for up to 8 people. He also has access to a set of driver guides that he has trained himself and all speak English. This gives you a bit of VIP feeling when you are cruising along the Tuscan roads towards the attractions you have chosen.

So, if you are thinking of a trip to Italy I can definitely recommend you to get in contact with Riccardo and his team to help you plan your vacation.

Cruising through Montalcino with Li, Laura, and Riccardo

Let’s now get down to talk about wine. Laura, who is working daily with organizing and managing wine tours either via other wine tour companies or via her own business Wine Club Italy, had planned our day tour in Montalcino. 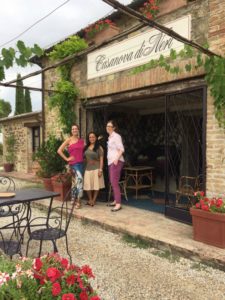 My friend Li, an American wine influencer and founder of the Twitter chat The Wining Hour, who was in Florence during July had contributed with those wineries she wanted to visit. With Laura’s help, we decided together to visit Casanova di Neri, Canalicchio di Sopra, and Cantina La Serena.

These are wineries producing very high-quality Rosso di Montalcino and Brunello di Montalcino wines. Casanova di Neri and Canalicchio di Sopra are probably well-known to most of you while Cantina La Serena might be a bit more of a hidden treasure.

Who doesn’t know of Casanova di Neri? My Florentine friend Silvia, who actually lives in Sweden, just adores their wines since we went to the Brunello vs Amarone dinner night a couple of years ago at Trattoria da Burde. There, we also had the pleasure of listening to Giacomo Neri himself talking about his Rosso di Montalcino DOC 2012 and Brunello di Montalcino DOCG 2009 Tenuta Nuova that we tasted that evening. 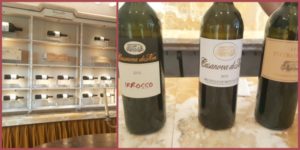 The Casanova di Neri winery, as I mentioned, need no grand presentation. However, to just say a few words; it was founded in 1971 by Giovanni Neri and today it is his son Giacomo Neri who is running the place.

The Tenuta Nuova 2001 received the top score by Wine Spectator in 2006. Since then their Brunello wines are always among the top wines. The Tenuta Nuova 2010 was then awarded 100 points by the Wine Advocate in 2015.

Pietradonice is a 100% Cabernet Sauvignon wine and, indeed, you feel the presence of black colored fruit, the green undertones, and the smooth tannins.

Somebody, Barbara I think, caught me in action while doing a live stream during the #winetasting at the Casanova di Neri winery. 😉☺🎥🍷 This is my thing and something I do very often when visiting #wineries. ☺🍷 … Last Monday, I visited Casanova di Neri in #Montalcino together with Li @TheWiningHour, Laura @wineclubitaly and the drivers Riccardo and Barbara @cruisesontheroadintuscany … The #livestream was very much fun, there was a lot of comments and engagement live from wine friends. A pity I was not allowed to post it. However, of course, one need to respect people’s privacy wishes. … #grapevineadventures * * * * * * #allabouttuscany #igersmontalcino #instawine #instamoment #instagood #wine #winery #motivation #vino #vinorosso #brunellodimontalcino #wein #motivational #motivate #italianwine #italy #tuscanwine #livevideo #winetime #winehour #意大利葡萄酒 #ワインイニタリー #awesomewine #bestphoto

After lunch, we headed to the Canalicchio di Sopra winery. I had already been there with Fisar a couple of years ago, however, it was very interesting to return and taste some other vintages of their wines.

Canalicchio di Sopra was founded by Primo Pacenti in 1962 and it was one of the founding members of the Consorzio del Vino Brunello di Montalcino in 1967. Today it is the grandchildren Francesco, Marco, and Simonetta who are at the helm of the business. 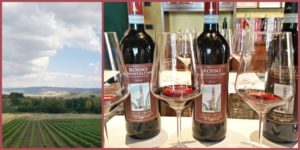 The winery produced their first bottle of Brunello di Montalcino in 1966. Thus, they have a lot of historical memory to lean back on when it comes to cultivating Sangiovese Grosso and producing Brunello wines.

When you visit them you really feel the passion and dedication with which they produce their wines. On the website, you can read that elegance is at the core of their production philosophy. I would indeed say that elegance is one of the first traits that come to mind when you sip on one of their wines, whether it is a Rosso di Montalcino or a Brunello wine.

2014 was a tough year as it was cold and rained a lot, especially during the summer. As a result, they had a 15% lower production in general where most of it was focused on Rosso di Montalcino. Only about 2000 bottles of Brunello di Montalcino were produced in 2014.

The Rosso di Montalcino 2014 has notes of cherry and blackberry, spices, and licorice. The tannins are smooth and non-intrusive. The cold and rainy year resulted in less influence of the fruits.

If we continue with the Rosso di Montalcino 2015, as mentioned before 2015 was a fantastic year and therefore they have high hopes for this Brunello vintage. The 2015 has a higher alcohol level than the 2014 but you do not feel the difference in the mouth as the red fruit is dominant in a beautiful way in the 2015 vintage.

The Brunello di Montalcino 2012 vintage has been considered almost as good as 2010. Freshness, a dominant fruit, a balsamic touch, and a dynamic structure are the traits that have been given to the 2012 vintage. (See Anteprime Toscane 2017. Benvenuto Brunello: l’annata 2012 riuscirà a battere la 2010? in Intravino).

Brunello di Montalcino 2012 from Canalicchio di Sopra is indeed in line with these characteristics having notes of red fruit and spices as well as scrub herbs and mint which can be defined as a balsamic undertone. The high acidity is a result of the dry summer. The Brunello di Montalcino 2012 is a very elegant wine and I am sure it will become even better in a few years.

This winery I did not know much about before visiting them a month ago. In fact, they told me that they do not even participate at the Benvenuto Brunello any longer as they find it too chaotic.

The original estate “La Rasa” has been in the Mantengoli family since the 1930s and more recently the production was moved to the Cantina La Serena of today when Andrea Mantengoli and his twin brother Marcello took over the management.

La Serena is an organic winery and their wine cellar is designed in an eco-friendly manner by the twin brother Marcello who is an environmental architect. Andrea has a strong belief in the fact that the wine must be an expression of the terroir and for it to be so you need to have an organic farming approach. He is contrary to any use of chemical fertilizers considering them a negation of a natural viticulture. 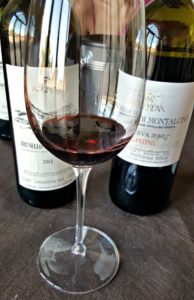 Their Brunello di Montalcino 2012 is a very elegant but intense wine with notes of fruit, spices, and a balsamic touch. The taste is fruity, full-bodied, and smooth. After a while, you feel a creamier character with notes of coffee and chocolate come through.

The Gemini Brunello di Montalcino Riserva 2010 is produced with a selection of the best grapes from a single vineyard every year. This wine is mineral and earthy with notes of ripe fruit. It still has a rougher edge to it than the elegance of the 2012. It is still very young and in need of time to find its ultimate elegance.

As a bonus, in the end, we also got to taste a Rosso di Montalcino DOC 2006 that they had found in the old cellar. This was to show the longevity also of the Rosso di Montalcino. This wine has notes of peach, almonds, toffee, dry fruit and a vinous character. It is still going strong and you feel the presence of the Sangiovese.

As I was very fascinated by the development of this Rosso di Montalcino, I bought a bottle and hope to share it with friends over a dinner very soon. 🙂

A Long and satisfying Day in Montalcino

Our day tour to Montalcino to taste Brunello wines turned out to be very long though very satisfying. We had the opportunity to learn more about each producer and their wines. Thanks to Riccardo and Cruises on the Road in Tuscany we could easily get from one winery to the other and enjoy a nice lunch in between.

Li and Laura were the perfect partners in wine on this wine tour. 🙂