During my few days in Romagna a couple of weeks ago, I visited Cantina Braschi in Mercato Saraceno in Romagna which is a winery with a focus on indigenous grapes. For those of you who read my last article, I started out in San Clemente, close to Cattolica, with an almost 24-hour winery party there.

The visit to Cantina Braschi was no less amazing when it comes to strolling through vineyards with a stunning view, tasting interesting wines made with indigenous grapes, and getting a full immersion in the Romagnolo hospitality.

I learned a lot about wine in Romagna during my short visit, and, of course, about this specific winery. I hope to be able to in some part transmit all the beauty, tradition, character, and passion that lies at the heart of wine making in Romagna.

In my last article, I also talked a bit about the Romagnolo traditions and fun-loving character of the people there. To continue on this thread, in a recent article on the blog of Enio Ottaviani winery you can read about how people from outside of Romagna seem to think that the life of the Romagnoli is non-stop fun and one long party. 😉

Of course, they are hard-working people, though it is a bit true that they see the beauty in the small everyday moments. For Scandinavians, who are often a bit trapped in their rigid schedules (which does not mean they work more than any other population 😉 ) it does seem like one long party atmosphere along the Adriatic coast.

Returning to talk about Cantina Braschi, I got to know them via my wine friend Lynn Gowdy who met them at Vinexpo in Bordeaux earlier this summer. In early July, I had them as guests at my #WinesOfItaly #LiveStream which then lead to me visiting their winery during my few days in Romagna.

Read on to learn more about their winemaking with dedication, passion, and strategy.

Mercato Saraceno is a village not far from Cesena in Emilia-Romagna, along the Valle del Savio. In ancient times, and for many centuries, it used to be an important market place. Today, farming and, especially, viticulture is the most important part of the local economy.

Cantina Braschi used to belong to the Braschi family and have a history that dates to the post-WW II era, perhaps even longer. Today, since less than ten years back, the owners are Davide Castagnoli and Vincenzo Vernocchi.

Davide and Vincenzo are investing in their vision of making wine mainly with indigenous grape varieties. In fact, they are cultivating the local grapes Albana, Famoso, Sangiovese, Bombino bianco (Pagadebit), Trebbiano, and Pignoletto. Then a bit of Chardonnay is sneaking in, after all.

They are indeed also focusing on every single vineyard and its terroir in order to create unique cru wines. Cantina Braschi includes the three vineyards Tenuta del Gelso in Bertinoro, Podere Montesasso in Mercato Saraceno, and Campo San Mamante close to Cesena. 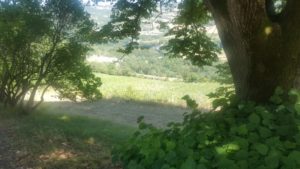 The interesting thing here is that the more attention grabbing wines in this context are probably the wines made with Albana and Famoso. Cantina Braschi’s production of Famoso and Albana wines is fairly small though compared to the production quantity-wise of the Sangiovese di Romagna.

There are not only diverse estates and vineyards within the Cantina Braschi’s properties but also different types of soil and conditions. The soil in Bertinoro is mainly calcareous and of clay while the soil in the Montesasso vineyards consists of sandstone. There is furthermore a considerable difference in altitude with the 120 m.a.s.l. in Bertinoro and the more hillside landscape in Montesasso being situated at 350 m.a.s.l.

This gives rise to different types of Sangiovese that also have contributed to their decision to produce so-called ‘cru wines’ with grapes from single vineyards. In this way, they are able to give a sort of ‘personal brand’ to each single Sangiovese di Romagna wine they produce.

In some sense, they are ‘branding’ their Albana and Famoso wines in a similar way. That is, they are focusing on the soil and the terroir for each single grape and wine produced.

Cantina Braschi does not stop here with these wines, they are as you might have noticed innovative and very productive. They have two other so-called production lines available, namely the Scarabocchio and the Sburoun line.  I did not taste these wines this time, so I will talk more about them another time.

Davide and Vincenzo are true entrepreneurs at heart, not only wine makers, and have taken their wine vision one step further by founding the Enoica Group. There are five different boutique wineries in the Enoica Group, namely Cantina Braschi, Podere Palazzo, Altavita, Terramossa, and Torre Matilde. They span from Emilia-Romagna down to Tuscany.

The team behind Enoica gives knowledge and support to help the boutique wineries in the Group to develop and grow. They define themselves as an “agricultural supply-chain system” where logistics, marketing, and sales are centralized under Enoica and the quality control is improved.

In an era when it can be hard for smaller wineries to move ahead, this is surely an intelligent step in order to share know-how and support each other those areas such as marketing and sales that can be cost- and time-consuming.

What about the indigenous grapes Albana and Famoso?

We have talked a lot about the grapes Albana and Famoso. However, for those of you not being that familiar with wines from Emilia-Romagna you might think…what are those grapes? What’s their story…?

According to Ian D’Agata in Native Wine Grapes of Italy (2014), by now my continuous source :-), Albana is considered to have gotten its name from the Colli Albani. It is stressed, that this was where the Romans first cultivated this grape variety before heading more towards the area around the Rubicon river where it is mainly grown today.

There are several different biotypes of the Albana though the most common one seems to be the Albana Gentile di Bertinoro. It is mainly grown in the areas of Bologna, Modena, Rimini, and especially in Ravenna and Forlì-Cesena. The Albana grows best and gives more elegant results in a calcareous and sandy soil which, as mentioned before, can be found around Forlì and Cesena.

According to Vincenzo and Davide, there has been a turn in the way Albana is produced lately with a focus on quality. They say that it used to be a more large volume and low-quality wine before, even though it is indeed the first DOCG wine of Italy.

It is considered to be a sort of “red grape dressed in white” thanks to its tannins, high acidity levels, and high sugar concentration. Even though such a unique grape, the producers used to adapt its production to the market needs thus forsaking the quality.

According to the DOCG regulation, Albana can be produced as: 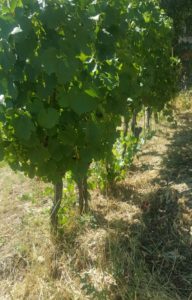 The five mother plants found some 20 years ago

This is a white aromatic grape variety which also goes under the names Rambella, Valdoppiese, or Bianca di Spinello. Since ancient times, it has been cultivated in Romagna in the areas around Cesena, Forlì, Faenza, Bertinoro, and Ravenna. It is a grape that disappeared for a while during the 20th century but that recently has been discovered and appreciated as a true gem in Romagna.

About 20 years ago, a row of five old vines was discovered and actually in the vineyard belonging now to Cantina Braschi close to Mercato Saraceno. They took shoots out of these mother plants and replanted them thus turning it into the Famoso vineyard of today.

The Famoso grape clusters are large, with big berries and thick skins which also means that they have often been used as table grapes through the years. Listen to Vincenzo talk more about the Famoso grape below directly from the vineyard.

I have in some sense already talked about the different wines that Cantina Braschi produces. However, I wanted to briefly do a recap of their wines. I will not discuss all of them in detail here as the article is already turning very long…

Romagna DOCG Albana Secco 2015 is a white wine with beautiful fruity notes of apricot and peach as well as a more green touch of straw or herbs. You can also feel an aftertaste of almonds. They also produce a sweet version of this Albana wine where the grapes are ripened a bit longer on the vine before harvest.

Another very interesting thing is that they have started to experiment with Albana in amphora which can be considered a sort of orange wine.

The Famoso Rubicone IGT 2016 is an aromatic wine, as mentioned above, with notes of fruit (white fruit) and a more green undertone with scrub herbs. It is furthermore a very fresh and mineral wine where the terroir is making its voice heard. 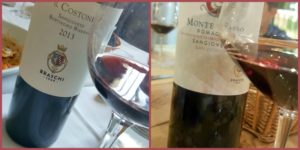 Il Costone Romagna DOC Sangiovese Superiore 2013 is produced with the grapes from the Bertinoro vineyard. The more Mediterranean style terroir in Bertinoro gives full-bodied wines with intense notes of cherry and a dominant touch of tannins. The Riserva version is only produced in the best years.

The Romagna DOC Sangiovese San Vicinio 2013 is a very fresh and more ‘northern’ style wine with less body and a bit rougher tannins. It is a very elegant wine even though it requires a longer maturation time in order to smoothen out the tannins.

Learning about wine in Romagna via Cantina Braschi

This turned into a long article, sorry for that, but as you have noticed there is so much to communicate and learn about Cantina Braschi and wine in Romagna.

Cantina Braschi embraces three different estates, or vineyards, where they grow their grapes. There, they produce wine with mainly the indigenous grape varieties Albana, Famoso, and Sangiovese. In this way, they are focusing on single vineyards thus creating so-called cru wines that in a better way reflect the local terroir.

Davide and Vincenzo are not only working in Cantina Braschi but have broadened their horizons by founding the Enoica Group that includes five different wineries. The aim is to streamline the supply chain system and increase the overall quality for the different wineries.

With Cantina Braschi and Enio Ottaviani, I had the pleasure of discovering winemaking in Romagna up close and learn more about their terroir and local grape varieties.

To learn more about the work of Davide and Vincenzo, watch #WinesOfItaly #LiveStream below.