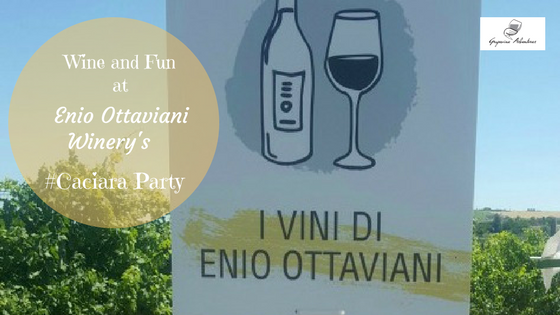 Well, it was indeed in January and at the Wine & Siena event that I first met and tasted the wines of Enio Ottaviani winery. However, it was a sunny day with fairly mild temperatures.

I was walking around one of the tasting rooms looking for a winery to do a live stream with. I was looking for something, some particular feeling telling me that ‘this is what I’m looking for’.

I saw the Enio Ottaviani stand, and I instantly thought that this might be it. The owners are Davide, Massimo, Marco, and Milena who are the grandchildren of the founder Enio Ottaviani.

I tasted their wines and in the meantime, I did a live video on Periscope with their marketing manager Ofelia. (Read more in the article 4 Top Wineries at Wine&Siena, Part II – New Tastings)

When I was contacted by Ofelia in the beginning of July asking if I would like to come to the winery’s summer party, I, of course, said yes straight away. Remembering how people in Romagna likes to have fun, who wouldn’t want to go!

Read on below, after the short historical background, about the #Caciara summer party at the Enio Ottaviani winery close to Cattolica…

A few words about Romagna

Romagna is one of the two halves of the region Emilia-Romagna. The Romagna part embraces mostly the districts of Rimini, Forlí-Cesena, Ravenna, and a small part of the Bologna municipality (the areas east of the Sillura river).

The Romagna area dates to the Etruscan era, after that there have been many different influences and dominations of the area. For example, by the Celts, the Romans, the Lombards, the Byzantines, the Roman Catholic Church, and a short Napoleonic dominion.

All these populations have indeed influenced the region and its culture and people in diverse ways. It is historically considered to have been a region where agriculture has had a strong hand. It is also known for having a long tradition of making hand-crafted military arms, having created the concept of ballroom dancing, and, of, course the cuisine Romagnola.

Winemaking is also an important tradition with the cultivation of indigenous grape varieties such as Albana and Famoso, and the Sangiovese di Romagna.

The Romagnoli are considered to be exuberant, fun-loving people with a penchant for eating and drinking well in the company of friends. This is, of course, a very simple and superficial description, the Romagnoli are so much more than that. However, to get you into the party spirit for the rest of this article, I wanted to briefly mention something about the character Romagnolo.

Just to mention some famous personalities that are connected to Romagna we have Dante Alighieri who lived in Romagna during his last years. Others more recent names to mention are the film director Federico Fellini and the poet and screenwriter Tonino Guerra.

You can get a good clue about a part of the history and character of Romagna by watching some of Fellini’s old films.

It is indeed impossible to talk about Romagna in just a few lines, but I still wanted to give a short overview.

On the morning of July 17th, I took the train towards Cattolica to then continue to San Clemente and the Enio Ottaviani winery by car. I was not sure what was awaiting me…but I was convinced that it would be a fun day.

I was welcomed by Ofelia and then shown around the winery by their oenologist before they put a glass in my hand. So, at noon it was time to start tasting their wines and the party was about to kick off.

While walking around and checking out the area and the surrounding vineyards I was sipping at their Sinfonia Chardonnay Rubicone IGP Frizzante. This is a fresh and mineral fizzy, sparkling wine with both floral and fruity notes. 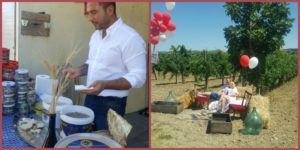 The guys at Enio Ottaviani winery had really put a lot of work into the setup. There were different stations such as the wine booth, the buffet area where they served the food, the anchovy booth, the ‘roasting’ area with roasted pork, spit roasted spare ribs and chicken, and the selfie point.

They organize this kind of party since several years. Davide Ottaviani told me that they got this idea because they are goderecci, i.e. pleasure-loving people themselves, and wanted to share this feeling with friends, fellow producers, local businesses, and others.

Below you can listen to Davide talk about the philosophy of their winery and the idea behind the #Caciara party.

In fact, several local restaurants and similar businesses had closed for the day to come and help out and party together with the Ottaviani family at their winery. I think this is really a beautiful gesture and indeed is a proof of the support they give to each other.

The lunch buffet was rich on many different local delicacies and had been created by Davide Lorenzi and Ronny Gattei. There was a selection of vegetables, cheese such as Parmigiano di montagna and ricotta, prosciutto crudo, sashimi di tonno and carpaccio di ricciola, pasta, risotto, and much more. I got a plate and took my place in the line and snapped some photos while waiting to fill my plate.

The guests were many at @enioottavianiwinery #Caciara #summer #party last Monday on July 17th. For those of you who have been to #Romagna, you probably know that they are the kings when it comes to making people feel at home and create a party atmosphere. At the Caciara party you really did experience the essence of a Romagnolo atmosphere. … Here I took a short video while waiting in line to taste some wonderful food at their party. @thehusbandintow … #grapevineadventures ——————————————- * * * * #allaboutromagna #igerscattolica #instawine #caciaraparty #summertime #igersromagna #festa #motivation #vino #vinoitaliano #vinorosso #wein #motivational #motivate #italianwine #italy #wineblogger #foodie #sangiovesediromagna #bombinobianco #意大利葡萄酒 #ワインイニタリー #awesomewine #bestphoto

As I have a sweet tooth, I especially liked the desserts. My favorite was the sorbet with Pagadebit Strati followed by Tiramisù with Merlot. The selection of fresh fruit was a perfect way freshen up a bit after all the good food and wine. See the article 2017 estate calda CACIARA freddo to read the whole menu.

As I did not know anyone and being a bit shy and reserved in the beginning, I took a seat randomly at a table. Somehow, I was sure that I would get to know people. Indeed, I made friends with a nice couple from Veneto (the husband was actually from Tuscany originally) and some local people who told me more about how the Ottaviani party normally is shaped.

After a couple of hours, it felt like we were already great friends.

Enio Ottaviani winery is, as mentioned before, situated in San Clemente close to Cattolica. The soil consists of mainly clay and sand close to the seaside which gives the wines their freshness, fruitiness, and minerality. This kind of soil gives a tiny bit less of structure and, therefore, the vinification is made mainly in cement tanks.

The use of cement tanks is an important part of the Enio Ottaviani vision that they believe very strongly in. They say they consider it to be a very artisanal approach because each cement tank is different in itself. They aim for fresh, fruity, and pleasant wines and thus cement tanks are ideal to bring forth the different aromas.

The use of oak is directed to the more structured red wine they produce with grapes from their vineyards situated further up the hill.

My Private Ottaviani Ambassador at the Wine Booth

During the day, I came back to the wine booth many times because I wanted to try and taste all their wines. However, I also frequented the wine booth only to fill up my glass. LOL

Already from the beginning, one of the guys in the wine booth took it upon himself to be the one to serve me the wine. He wanted to make sure that I tasted the wines in the right order.

Yesterday I was at the #Caciara summer party at @enioottavianiwinery ☀️☀️ … Ero invitata alla festa Caciara ieri alla cantina Enio Ottaviani vicino a Cattolica. Qui mi versava loro #Strati, 100% Bombino bianco. … I feel honored to have been invited. When you get the opportunity to go to a true #festaromagnola, you, of course, go. Even though you, as me, are a bit reserved and shy when I don’t know anyone…it is fun just being there and watching the people. ☺☺ After a while you get to know people anyway… … Here in the video, you can see the guy who turned into my private promotor of the wines of Enio Ottaviani. I will write more about this in a coming article…Sorry if the video is in Italian. He was pouring their white wine Strati. This is a 100% Pagadebit #Bombino bianco wine. … #grapevineadventures ——————————————- * * * * #allaboutromagna #igerscattolica #instawine #caciaraparty #summertime #summerwine #festa #motivation #vino #vinoitaliano #vinorosso #wein #motivational #motivate #italianwine #italy #wineblogger #SanClemente #sangiovesediromagna #winetasting #意大利葡萄酒 #ワインイニタリー #awesomewine #bestphoto

Their white wines are produced with the local grape variety Bombino bianco, and the international grapes Chardonnay, Riesling and Sauvignon. Their white wines are indeed fresh, fruity, floral, and mineral and goes well with seafood. They are, after all, just a few steps away from the well-known Adriatic coast (costa romagnola). 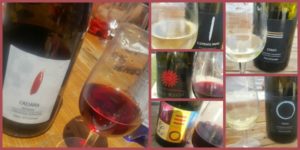 I especially liked the Strati Pagadebit DOP as I am very into Bombino bianco as a grape for the moment, and it is a perfect wine on a warm summer day.

Among the red wines, the Caciara Romagna DOP Sangiovese Superiore is their flagship wine. It reflects the general vision of the winery. It is a fresh, fruity, and not too structured wine that is very enjoyable to drink. It can also be served a bit more chilled than is generally the norm with red wines.

Sole Rosso is a more structured wine that is matured in large oak barrels. It has notes of ripe fruit, spices, and flowers such as violet, etc. It is an elegant wine with smooth tannins. Merlot Rubicone IGP is a 100% Merlot wine. It has more complex notes of fruit, flowers, and spices. After the fermentation in cement tanks, it is matured in barrique.

The cherry on top of the #Caciara summer party was the rock/pop band Romagnolo Naufraghi playing a mix of international and Italian hits. It was the perfect complement to the summer party. Excellent food and wine accompanied by good music. (See more here.) 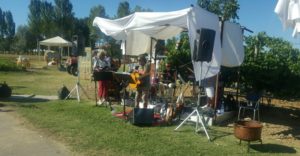 I do adore this band and their stamina because they started just after noon to play and went on non-stop until late evening. When I went back to the hotel around 9.30pm they were still playing, so I can only guess that they continued still for a while after that. 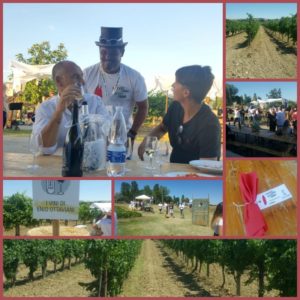 After the #Caciara summer party

On Enio Ottaviani’s blog, we can read that there were more than 600 people at the party from different parts of the world. Indeed, it was a wine summer party in its truest sense. We all got a full immersion into the Enio Ottaviani winery, its wines, its people, its vision, its friends, all surrounded with good food and music. I think that everyone who was there cannot wait to come back next year and all over again get to be a part of the Enio Ottaviani party spirit.

So, I hope I have managed to transmit at least a small part of the easygoing and fun atmosphere at the #Caciara summer party.