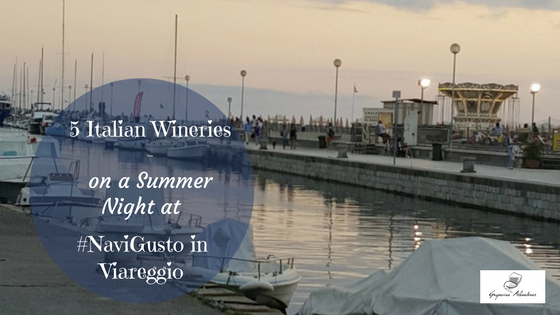 Last weekend, in early July, we tasted wine from five Italian wineries, among others, on a summer night at #NaviGusto in Viareggio.

Morris started telling us about a wine event, #NaviGusto, in Viareggio on 8-10 July. He asked us to come and taste some wine and hang out. First, I thought it would be too much…it feels like I am around constantly on wine events since the last 1,5 months. Then I thought about it some more, it was tempting being close to the beach and all.

Now Li is here from New York too, so, of course, we went and it was so much fun.

The first year of #NaviGusto in Viareggio

Li and I arrived at Viareggio last Sunday afternoon where my Viareggio-born friend Cristina waited to pick us up. Even though it was still fairly hot on this summer afternoon, we headed straight for the #NaviGusto event when it opened at 5 pm.

This was the first year of the #NaviGusto event. It is an initiative where they want to combine wine & food with nautical science, art, and culture all in one event. #NaviGusto takes place in the port in Viareggio, which gives it a beautiful scenery with the boats and the sea as a background.

The event area was divided into two parts with the wine & food section on the one side and the design and nautical science on the other side.

According to me, it was just the right size of an event for a summer day after the beach. There was a good mix of mostly local smaller wine and food producers. Also, there were some wineries from other regions such as Lombardy, Piemonte, and Sardegna.

We started our tasting tour in Bolgheri with the winery Villa Noviana. The owners are from Modena and they bought the estate around 10 years ago. They are an organic winery that aims to produce wines that reflect the uniqueness of the local Bolgheri territory. 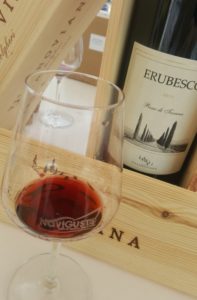 They are all interesting and enjoyable wines in their own way. Teia is a fresh and mineral Vermentino wine with notes of flowers, citrus fruits, and scrub herbs, among others. Erubesco has wonderful notes of fruit and herbs that come forth thanks to the maturation in cement tanks and thereafter laying in the bottle. There is no presence of oak that veils the aromas.

Imeneo and Sant’Uberto, especially, are more structured and smooth Bolgheri wines. Imeneo is aged for 10 months while Sant’Uberto is aged for 18 months in barriques of French oak. Both are then refined for another 6 months in the bottle. They are full-bodied and elegant wines that give a voice to the local area.

Terre Apuane is a winery situated close to Carrara in the district Fosdinovo. It used to belong to Mario Soldati, a well-known Italian writer, wine and food journalist, and film director. In 2011, the winery was recreated under the ownership of Emanuele Crudeli. 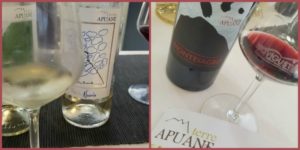 The white wines Perle Nuove (100% Vermentino) and Biancheforme (70% Vermentino, 20% Albarola, and 10% Malvasia) as well as the red wines Formarossa (80% Massaretta and 20% Sangiovese), Vermentino nero, and Montesagra (a blend of Sangiovese, Massaretta, and Vermentino nero) are all a typical for the viticultural area around Carrara. Read more about these wines in the article Terre Apuane Montesagro 2012 by Morris Lazzoni.

The grape variety Massaretta also goes under the name Barsaglina and is typically cultivated in the area around Massa Carrara. This is a grape that has been rediscovered lately and it gives fresh and aromatic wines.

Terenzuola is a winery on the border of northern Tuscany which, as the owner Ivan Giuliani himself says, is without borders. This because rather than following regional borders the winery embraces the district of the historical Lunigiana area.

The Vigne Basse is a fresh wine with a mix of aromas of citrus fruits, flowers, and herbs. The Fosso di Corsano is a fresh and mineral white wine with more complex aromas. They are both a beautiful interpretation of the local terroir.

The Vermentino Nero from Terenzuola is one of my favourites. It is a fresh and structured wine with fruity notes such as of cherry, raspberry, and strawberry as well as a spicier touch.

Vermentino nero is an indigenous grape variety which is typical in the lower Lunigiana area. It had almost disappeared for a period in the mid-19th century but then it was rediscovered in the 1980s.

Below, the owner, Ivan Giuliani talks about the grape varieties and their history. Sorry, the live stream is in Italian only.

Ricci Curbastro is an old noble family from Lugo di Romagna, close to Ravenna, even though they originate from Florence. They have two estates in Emilia-Romagna and one in the Franciacorta area.

The Ricci Curbastro estate is committed to sustainability in many different ways. They calculate the greenhouse gas emission or rather their carbon footprint. Since 2008 they also use solar panels to produce their own electrical energy. These are only some of the ways in which they combine tradition with innovation.

Sustainability is furthermore important for Ricci Curbastro directly in the vineyard to be organic and protect the environment. They do not use pesticides since many years, apply green manure, and are attentive to the biodiversity.

Franciacorta Satén is a 100% Chardonnay sparkling wine that has been refermented in the bottle for 40 months before the disgorgement. It is a smooth and elegant Franciacorta wine with the notes of ripe fruit, toasted bread, and an aftertaste of almonds.

Franciacorta Dosaggio Zero “Gualberto” is a blend of 60-70% Pinot noir and 30-40% Chardonnay. It has done 60 months in the bottle. After the disgorgement a dosage syrup without any sugar is added, thereof the zero dosage. Since the Fisar Firenze tour to Franciacorta a couple of years ago, zero dosage has been one of my favourites.

It is a fresh and mineral sparkling wine with notes of both fresher fruit and dry fruit as well as the characteristic toasted bread and touch of almonds.

The Su’entu winery in Sardegna is a lovely discovery. I had seen them at another event but not really gotten around to taste their wines before. This winery is owned by the Pilloni family and situated in Sanluri close to Cagliari. The word Su’entu actually means wind, i.e. the wind that blows away the clouds, cleans the air and brings back the calm.

Su’entu is a fairly young winery that however valorizes to the local territory, the terroir, and the local winemaking tradition. One of the very interesting things is that they make a 100% Bovale wine as well as a Spumante Brut Rosé with the Cannonau grape.

The Cannonau Spumante Brut Rosé is a fresh and mineral sparkling wine with notes of red fruit and “pink flowers“. It is a sparkling wine made with the Charmat method in the autoclave. This wine is just perfect as an aperitif on a summer day or also paired with other lighter dishes.

Bovale is an indigenous grape variety in Sardegna. According to Ian D’Agata, there are two different varieties of Bovale, namely Bovale Grande and Bovale Sardo. (See Ian D’Agata, Native Wine Grapes of Italy, 2014, pp. 208ff.)  The former seems to be of Spanish origin and considered a biotype of the Carignano grape. It is considered to be most common around Cagliari.

However, let us here assume that we in the case of the Su’entu winery are talking about the more common Bovale Sardo variety. The Bovale Sardo seems to be more similar to the variety Cagnulari and to have several different biotypes.

He also mentions that the research has found a distinct biotype in the Marmilla region of Sardinia called Bovaleddu Antigu. As the Su’entu winery seems to be situated in the Marmilla district, one could think that we are talking about the Bovaleddu Antigu there. This would be for a future article and a more in-depth talk with the owners of the Su’entu winery. At this point, I do not feel confident to make any further analysis of the Bovale grape variety.

Returning to the tasting

A July Weekend in Viareggio

The weekend in Viareggio was a nice change of pace. The wine event #NaviGusto had the right dimensions of wine and food mixed with nautical science and design, perfect for an evening after the beach. We tasted wines from Tuscany as well as from Lombardy and Sardegna.

There were some lovely discoveries such as the sparkling Cannonau rosé, wines with the indigenous grape varieties Massaretta and Vermentino nero, and a 100% Bovale wine, even though we did not get to taste the latter one. However, I hope that Morris Lazzoni will organise a wine tasting of the Bovale from Su’entu soon. 🙂

The morning after, my friend Cristina brought me to Patalani pastry shop and café in the centre of Viareggio, which is owned by a dear friend of hers. And let me tell you, it was hard to know what to choose among all the yummy pastries there. 😉