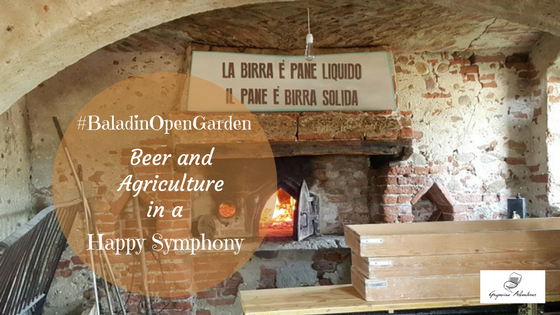 #BaladinOpenGarden can be said to be a way of combining beer and agriculture in a happy symphony. On June 21st, I headed towards Piemonte, not to taste wine, but to attend the inauguration party of #BaladinOpenGarden. For those of you who might not be much familiar with Italian beer, Baladin is a historic brewery which was started by Teo Musso back in the late 1980s.

In the beginning, it was quite experimental. On the website, you can read that Teo himself built the first brewery installation together with a friend in Belgium and then transported it back to Piemonte. In fact, he is considered to be the father of artisanal beer production in Italy. The Baladin brewery has grown and expanded for every year to today have become probably the most important artisanal beer production reality in Italy.

The vision of an agricultural local community, not only beer

Teo Musso had a vision of creating a local agricultural community that was not only focused on beer production. Rather, his idea was to create a space where his artisanal and sustainable beer production could meet and embrace other agricultural realities in the local area around Piozzo in Piemonte.

The fascinating thing with Teo Musso and Birra Baladin is his way of combining a support for the local community with an innovative and entrepreneurial mindset. He remains with his both feet on the ground in his home district in Piemonte at the same time as he is not afraid of expanding the business in different areas.

On June 21st, we could experience the result of this idea he had a couple of years ago. With the help of a crowdfunding project, where he actually has raised more than 88,000 USD, he has managed to finance the construction of the #BaladinOpenGarden.

Moreover, it is not only a place for farmers and other local businesses to come together, but it is also thought to be a weekend park far away from the shopping centres. Instead of walking aimlessly around a shopping centre on a Sunday glued to the smartphone, Teo wants people to come to #BaladinOpenGarden and enjoy more simple pleasures. It is a way to draw people back to a way of socialising that today almost seems old-fashioned.

Let’s get the party started at the #BaladinOpenGarden

In the afternoon, when we arrived in Piozzo we were taken on a “press walk” around the Baladin park where Teo Musso explained the different areas and attractions. The main structure is the Cascina Coda which is a typical piemontese farmhouse that dates to the 17th century. Within this farmhouse you can find the old wood oven, the so-called bakery, the cellar with the barrels for beer ageing, the butcher “station”, the coffee shop, the stands with produce from local farmers, the chocolate laboratory, among others. 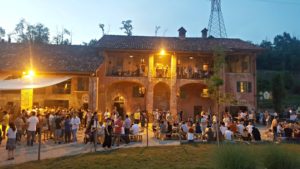 In the park, there is a playground for children that is still under development with animation and various kinds of “offline” activities to stimulate the fantasy of the little ones. There is also a stage to have live music and entertainment in the evenings.

The #BaladinOpenGarden officially opens on July 23rd. However, on July 12th to 16th, there will be a series of festivities that refer to the anniversary of the founding of the Baladin Brewery on July 14th in 1986. In fact, Baladin last year celebrated 30 years of activity and this year the festivities will be of 30+1 years.

To learn more about the #BaladinOpenGarden, go to the Baladin website.

12 thoughts on “#BaladinOpenGarden – Beer and Agriculture in a Happy Symphony”