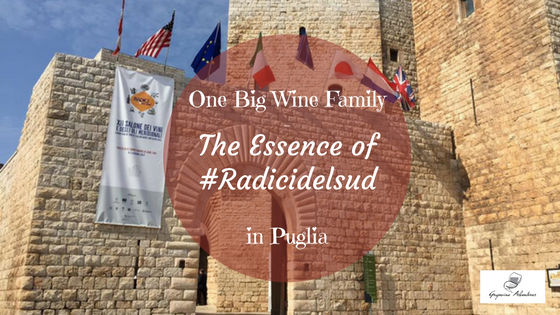 After almost a week at #Radicidelsud in Puglia now, it feels like being a part of one big wine family. This is a wine event that is organized in Bari every year to showcase and award wines from southern Italy. So far, I can say that it has been an amazing experience. Today, June 5th is the last day and later today the awarding ceremony will take place.

I wanted to write something at half-time so to say, but there was never much time. It has been a very intense week with lots of tours around Puglia and Basilicata and different tastings, all wonderful experiences. I think all of us in the wine writer and buyer group have had a lot of fun and feel happy.

In this article, I will not go more in-depth on the different winery visits or vertical tastings as I will tell you more about this in coming articles. However, I wanted to give a brief recap in pictures, videos, and a few words to show you our different adventures in Puglia.

Before continuing, I also wanted to thank the organizers of #Radicidelsud17. Nicola Campanile and all the others in the organizational team have done a great job and managed to create a sense of community among us which is really the important thing. On the press tour, already after the first day, it felt like we were a group of old friends.

Nicola always had a smile on his lips, even though probably being stressed with all organizational things. Giuseppe Barretta and Vito Gallo (our very own photographer) made us feel like at home while away from home, so to say. There are so many anecdotes to tell, that made this trip so amazing, I will get back to this in the next article.

Wine Around Puglia and Basilicata in 3 days

I arrived in Bari and #Radicidelsud in the evening on May 30th, being thrown directly into a vertical wine tasting of the Primitivo Piròmafo, Valle dell’Asso by Cantina Fiorentino.

Tonight I arrived to #Bari more than one hour late due to a technical problem on the railway line… However, it was all made better by the vertical #winetasting I arrived smack in the middle of at the first evening of @Radicidelsud. … We tasted 6 different vintages of Piromàfo #Negroamaro #Salento IGP Valle dell’Asso from Cantina Fiorentino. The vintages were 1999, 2001, 2003, 2006, 2007, and 2007. … Some common traits are of course the ripe fruity notes, the acidity, the tannins, often spicy notes, tobacco in some vintages, more green and herby notes in others. The 1999 was elegant and smooth, going strong still after almost 20 years. … #grapevineadventures ——————————————- * * * * #allaboutpuglia #igerspuglia #instawine #igerssalento #summertime #radicidelsud #welovepuglia #motivation #vino #vinorosso #vinoitaliano #wein #motivational #motivate #italianwine #italy #terroir #wineinpuglia #winetime #意大利葡萄酒 #ワインイニタリー #awesomewine #bestphoto

This was the warming up for the coming three days where we had an intense schedule and rhythm worthy of any elite athlete. Joking! It was intense though lots of fun with a new place and a new bed in a new B&B every night.

The wonderful thing is that we have been able to experience wine areas and realities where, at least, I had never been before. Well, I have been to Puglia before and I had already been to Manduria and the local wine cooperative there. However, that was before I became more ‘obsessed’ with wine. 😉

Day 1 of the Press Tour

On the first day of our press tour, we headed early towards Manduria. The first visit was to the vineyards of Varvaglione winery close to Manduria. Marzia Varvaglione showed us a part of their vineyards with the older vines as well as newly grafted ones.

We then had lunch at the cooperative Produttori Vini Manduria followed by a setup where we could meet a group of local wineries and taste their wines one-on-one. When it comes to white wines, there was a mix of wines mostly made with Malvasia del Salento, Fiano, and Chardonnay. The Primitivo grape was the number one among the red wines, followed by some Negroamaro wines. We met with the following wineries:

Below, you can see a collage of the different wines I tasted.

We then headed to Gravina, where we met with the owners of Botromagno winery for aperitif and dinner where we learned more about their history and wine production.

#Gravina Bianco DOP by Botromagno winery Yesterday, in Gravina in #Puglia, we had the pleasure of meeting Beniamino and Alberto, as well as their father Franco d’Agostino. They are the owners of @Botromagnovini winery. We also met their oenologists Matteo Derosa and Fiorella Paradiso. It was all great fun at dinner together at Madonna della Stella via #Radicidelsud. ☺☀️ … The wine here in the photo is a 60% #Greco and 40% #Malvasia wine. A fresh and slightly mineral #wine with notes of fruit such as apple and peach. An enjoyable white wine. … #grapevineadventures ——————————————- * * * * #allaboutpuglia #igerspuglia #instawine #igersgravina #summertime #motivation #vino #wearepuglia #vinobianco #vinoitaliano #wein #motivational #motivate #italianwine #italy #terroir #pugliawine #意大利葡萄酒 #ワインイニタリー #awesomewine #bestphoto

Day 2 of the Press Tour

The second day, we got on the bus in direction to Melfi in Basilicata where a group of producers of Aglianico del Vulture was waiting for us. The tasting was organized in the castle of Melfi with a stunning view of the surrounding landscape. The producers make some interesting wine (as usual you will get a more detailed report further on) and I learned a lot from the owners of Cantine Lagala while I was sipping on their different wines.

Another of the producers I talked with was Antonio Cascarano from Camerlengo winery in Rapolla in Basilicata. He produces natural wines adopting spontaneous fermentation and natural yeasts. He told me that his wine cellar actually is in a cave on his property, thus balancing the temperatures in a natural way.

Day 2 was ended with a meeting with producers of Nero di troia in Lucera, in the north of Puglia. Again, we had the possibility to mingle with the producers and ask them more about their wine production.

A container full of #Neroditroa rosé The other night in #Lucera, we met with a group of producers of Nero di Troia wines. … Nero di troia is a #grapevariety that is cultivated mainly in the nothern parts of #Puglia. It is a fresh and structured wine with notes such as spices and violet. Generally, it can be a bit rough as a young wine, but becomes smoother and enjoyable after 1.5-2 years of maturation. … Check out my blog during the coming weeks, to read more. … #grapevineadventures

The rosé wines made with Nero di troia are interesting, very fresh and perfect on a summer day. This grape variety is perhaps not that well known yet, however, it makes for lovely red wines with non-intrusive tannins and notes of, for example, clove and violet.

Day 3 of the Press Tour

On the last day of our press tour, we departed from Lucera to head towards San Severo. Our first stop was the d’Araprì winery that produces sparkling wines with the Champenoise method using the local grape varieties Bombino bianco and Montepulciano as well as the more international Pinot Noir. The different combinations of these three grapes give very interesting and fantastic results. They also do a Riserva Nobile with only Bombino bianco.

Below, one of the three owners, Girolamo D’Amico, talks about their different labels and the grape varieties they use. (Sorry, the video is only in Italian, and not in English.)

The tour was rounded up by a visit to Valentina Passalacqua and another winery close to San Severo, D’Alfonso del Sordo. Valentina Passalacqua is an organic and biodynamic wine producer. She is very much into a holistic approach where the respect for the land and to have a production in symbiosis with nature is important.

Valentina adopts spontaneous fermentation and does not add any yeasts during the fermentation processes. She produces wines with mainly the grape varieties Bombino bianco, Fiano, Falanghina, Negroamaro, and Nero di troia.

Returning to D’Alfonso del Sordo, they produce Nero di troia wines first and foremost. This is a winery that dates back to the early 19th century with the noble family Del Sordo. Further on, they would unite forces with the D’Alfonso family who was viticulturists, thus continuing the wine production up until today.

One of the stops during the 3 day press tour at #Radicidelsud, was at the winery #dalfonsodelsordo close to San Severo in the north of Puglia. The family D’Alfonso di Sordo has a long history as #viticulturists and they started out already in the early 19th century. @radicidelsud … They produce wine with the native #grapevarieties #Bombino bianco and #Neroditroa. We tasted different wines when we visited them the other day, such as Casteldrione #Puglia IGP Rosso. This is a 100% Nero di Troia wine with notes of clove, violet, and red fruit. The tannins are non -intrusive and smooth. … Check out my blog soon for an article about Radici del sud. … #grapevineadventures

The #Radicidelsud Event Goes On…

After the press tour, the event continued with blind tastings and other happenings. Today is, as mentioned above, the last day and I am soon headed to taste some more wines and attend the award ceremony. It has been a wonderful week, I am really happy to have been invited this year. During the next few weeks, I will tell you more about the different wineries and their wines. Stay tuned!