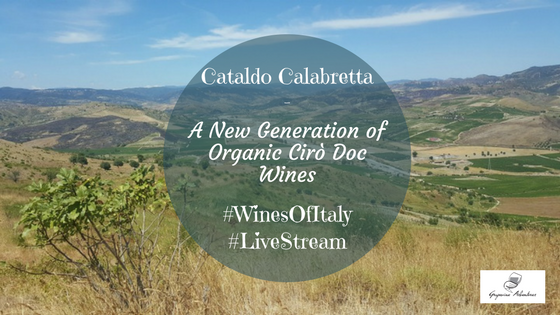 On January 7th, 2017, we were talking about artisanal and a sort of new generation of organic Cirò Doc wines at #WinesOfItaly #LiveStream. My guest was Cataldo Calabretta, who is a winemaker in Cirò Marina. I tasted Cataldo’s wines for the first time at Vinitaly last year. Then, last summer in I had the opportunity to visit his winery in Cirò Marina when I was in Calabria for a bit of holiday.

Cataldo Calabretta is the fourth generation of vine growers in his family. He took over the management of the winery less than 10 years ago and has since then also renovated the old cellar. They have also recuperated old cement tanks that they now use for the maturation of their Cirò DOC wines.

They are an organic winery and chose to become so around 10 years ago out of ethical reasons. Furthermore, they do not use any added yeasts, they apply spontaneous fermentations, and try to reduce any filtrations to a minimum.

An interesting fact, that Cataldo told us is that varieties such as Greco Bianco and Magliocco often is cultivated in the vineyards together with the Gaglioppo to reduce the level of tannins in the Gaglioppo.

The Richness of Indigenous Grape Varieties in Calabria

The amazing thing about Calabria is that it is a real treasure when it comes to indigenous grape varieties. It is a region very rich in different very old grape varieties, many of which has gone lost and are still today unknown.

He takes the example of the “Grecanica” area on Aspromonte in Calabria, which nowadays has been reduced to very small vineyard lots on the mountain. In one small vineyard lot, you can, however, see up to 50 different local grape varieties growing. It can be everything from white grapes, red grapes, as well as grapes to be dried (for appassimento), etc.

Cataldo stresses that this in some sense shows how the viticulture tradition in Calabria dates back thousands of years.

The Importance of the Byzantine era in the Cirò Doc area

Generally, the period of the Greek settlers who arrived around the 8th century BC has been considered as important for the heritage of grape varieties and viticulture in Calabria.

Cataldo emphasizes another historical period as very decisive and bringing back the prosperity to the viticulture in Calabria, namely the era of the Byzantine Empire. He says that many grape varieties indeed dates to those years between the 3rd century AD and up to the Middle Ages.

He, furthermore, stresses that through research it has been shown that the Gaglioppo, which often has been considered to have Greek origin, rather is a grape variety with roots in Georgia.

The wines produced by Cataldo Calabretta

Cataldo says that a red Cirò DOC wine (100% Gaglioppo) generally has a not too intense ruby red color, an elegant and complex nose, and austere tannins.

Do You Want To Learn More…?

Here I have only given a brief overview of the different topics we covered with Cataldo Calabretta regarding viticulture and wine production in the Cirò DOC area in Calabria. To find out more about this and, of course, about Cataldo’s wines you can watch the replay of #WinesOfItaly #LiveStream below (sorry for the dark images).

Would you like to get the latest news about the next live streams? Feel free to sign up for my newsletter right HERE.