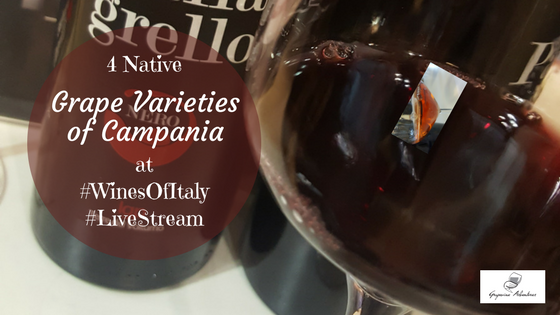 On January 24th, 2017, we talked about four a bit lesser known native grape varieties of Campania at #WinesOfItaly #LiveStream. My guest for the evening was sommelier Armando Pistolese. I got to know Armando while he was working at the wine bar of the Consortium of Chianti Classico at the Mercato Centrale in Florence.

Armando studied to be a sommelier with AIS, which is one of the sommelier associations in Italy next to Fisar, Onav, and ASPI. He then did a Master in marketing followed by a stage at the Consortium of Chianti Classico.

During the last years, he has been working for different wineries as well as the Chianti Classico wine bar at the Mercato Centrale. Now, he is back in Salerno where he is planning on opening his own wine bar.

He started out with the Pallagrello and mentioned how it was one of the favorite wines of King Ferdinand IV of the House of Bourbon. There are both Pallagrello nero (red) and Pallagrello giallo (white) grapes. In the past, the white Pallagrello grapes used to be confused with the Coda di Volpe grape.

The Pallagrello is a native grape variety of the area around Caserta in Campania. The white aletrnative is often likened to Chardonnay wines. The Pallagrello nero (red) gives very strong and a bit rustique wines that need a lot of time to settle and become smoother. One of the wineries that Armando mentioned here was Nanni Copé close to Caserta.

The Biancolella grape is almost only cultivated on the Island of Ischia, which is also called the Green Island. It was one of the favorite grape varieties of the famous Italian intellectual and wine critic Luigi Veronelli.

The grape variety is considered to have Greek origin and it is cultivated also on the island of Corsica where it goes under the name Petite Blanche. It is used also as a blend in the Costa d’Amalfi DOC white wines.

Some wineries to check out:

The Coda di Volpe is a grape variety that stems from Greece and it also exists as both white and red grapes. However, the most popular and frequently produced is the white wine with this variety. The grapes get their name from the grape bunch’s similarity to a fox tail.

The Coda di Volpe is cultivated in the areas of Avellino, Benevento, Caserta, and Napoli. Furthermore, they nowadays produce 100% Coda di Volpe wines within the denomination Taburno Sannio DOC.

Some wineries to check out:

It is a spontaneous crossbreed between Aglianico and Tintora. Furthermore, it never suffered the phylloxera and thus there are vine stocks that are over a hundred years old.

The 100% Tintore wines are produced within the IGT denomination. This grape can only be used as a blend in the Costa d’Amalfi DOC together with the Piedirosso grape, not in the form of a pure 100% wine.

A winery to check out:

What more did we learn…?

Well, we also learned some cool food and wine pairing things. For example, Armando told us that the best pairing with the Asprinio d’Aversa is mozzarella cheese. The l’Aversa Asprinio DOC has a bit bitter aftertaste and thus amalgamates well with the sweeter taste of the mozzarella.

Another perfect regional pairing we learned, was that pizza is best paired with the Gragnano DOC. The Gragnano, that got its DOC status in 1988, is a slightly fizzy wine made with the grape varieties Piedirosso (min 40%), Sciascinoso and/or Aglianico (max 20%) as well as Castagnara, Tintore, San Francesco etc. (max 20%).

To get the whole picture, you can listen to the entire live stream below:

Would you like to get the latest news about the next live streams? Feel free to sign up for my newsletter right HERE.