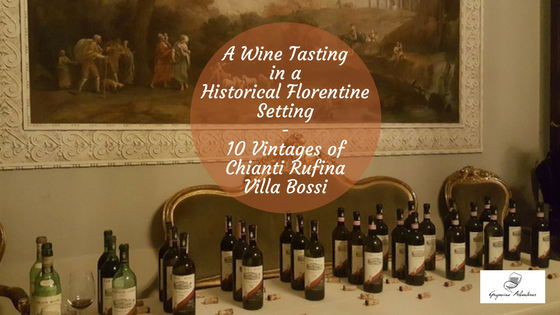 When you get invited to a wine tasting such as the one that took place on February 11th in Palazzo Gondi, in the heart of Florence, with Chianti Rufina wines…it is almost like reaching a moment of Zen. At least for me, being a former professional historian, even though my specialization was nationalism in the 19th century.

There is a combination of pure excitement and joy, though somewhat surreal, as well as a stimulation of your senses when tasting wines in the middle of Florentine history dating back to the Middle Ages.

Now you might think, what is she talking about? Well, let me explain better…

The vertical tasting of Chianti Rufina wines was to celebrate the 45 harvests (1972-2017) of Bernardo Gondi, the present Marquis, and owner of Tenuta di Bossi. To celebrate this impressive winemaking career, we had the pleasure of tasting 10 specially selected vintages ranging from 1972 to 2007. The whole family, Bernardo, his wife Vittoria, and their sons Gerardo and Lapo had organized it all together.

In the midst of Florentine history with the Gondi family

Though I am not going into a long discussion of Florentine and Italian history here, I will briefly refer to some points that can be interesting to know about the Marchesi Gondi. Also, as a way of better understanding the surroundings of where the wine tasting took place.

The family is considered to stem from the Consorteria dei Filippi which is mentioned by Dante in his Divine Comedy as one of the oldest families in Florence. As far back as in 787, their ancestor Braccio Filippi was appointed knight by Charlemagne. In fact, the coat of arms of the Gondi family consists of two maces designed as a St. Andrews cross. The family motto ‘non sine labore’ (nothing without labor) is written below.

According to the research, it was Orlando di Bellicozzo, a descendant from Braccio Filippi, who in the late 12th century took the surname Gondi from a relative in another branch of the family. Since then the family has had a long and rich history which has been closely connected to the essence of Florentine history and development.

The Gondi palace, which is situated in via Gondi just in front of Palazzo Vecchio, was built in 1489 on the initiative of Giuliano Gondi the Elder. The architectural project was designed by Giuliano da Sangallo.

After the wine tasting, when we before the dinner were given a tour of the palace, we were, among other amazing things, shown a small bedroom which used to belong to their great-grandfather.

Lapo Gondi, one of the two sons of the present marquis Gondi, told us the story that his great-grandfather had had a fervent desire to be able to wake up to the view of the cathedral (Duomo), Santa Maria del Fiore. Thus, he decided to carve out a window in his bedroom in order to fulfill this wish.

It was amazing to stand in this room and see the Duomo through the large panoramic window. It felt as if you could open the window and almost touch the Duomo with your hand.

The Tenuta di Bossi estate has been in the hands of the Gondi family since 1592. The estate in itself has a long history before it was purchased by the Gondi family. It is said that there used to be a castle on the grounds of the estate which was, however, torn down in the mid-12th century by the Florentines in their war against a local noble family.

If we fast-forward some centuries, it was only after World War II that the estate and its farming techniques were modernized. The vineyards and the olive groves were replanted, and a part of the land was converted into grain production.

Tenuta di Bossi is situated close to Pontassieve at an altitude of 200-400 m.a.s.l. The estate comprises 315 hectares of which 18 hectares are vineyard. They cultivate the native grape varieties Sangiovese, Colorino, and Trebbiano Toscano as well as the international varieties Cabernet Sauvignon, Merlot, Chardonnay, and Sauvignon.

When I arrived, we were all welcomed by Patrizia Cantini and the Gondi family. In that moment, I also ran into my wine friend Riccardo Silla Viscardi whom I got to know last year at another wine tasting tour. He is always fun to hang out with and a great source of wine knowledge. I feel very fortunate to know people like him and Patrizia Cantini. Also, this time, I learned a lot from him during the tasting.

As mentioned before, we were sticking our savvy noses in the glasses and sipping on ten different vintages of Chianti Rufina wines surrounded by centuries of Florentine history. At the same time, we were listening to Bernardo Gondi, his oenologist Fabrizio Moltard, and Massimo Castellani, the president of Ais in Florence, describing the characteristics of the different vintages.

The first wine we tasted, 1978, is very important and dear to Bernardo Gondi because it marked the year of his marriage to Vittoria. Regarding the wine, it conveys the typical character of the Sangiovese even though it due to the years that have passed has lost some of its aromatic vigors. It has aged well and still has a certain body and structure.

Both 1978 and 1981 have that characteristic Sangiovese style. Already from the beginning, only red grape varieties were used for this Riserva. This was their decision, even though it was allowed (and still is), according to the regulation, to use white grape varieties in the Chianti Rufina wines.

1981 is, furthermore, considered to have been a glorious harvest for Tuscany in the 1980s. The fruit is predominant as well as notes of dried red flowers and a hint of scrub bushes. Both wines have a long aftertaste.

The years of transition

The vintages 1986 and 1988 can be considered as transitional. In 1985, Bernardo Gondi decided to introduce Cabernet Sauvignon at his estate in order to slowly change the characteristics of the Riserva to a more international and full-bodied style.

In the 1986 vintage, the older style is still hanging in there. This year was characterized by a hard and long harvest period after a very rainy early autumn. The 1986 has fruity, floral, and balsamic traits. It is a fresh wine with a lot of personality.

The vintage 1994 can be considered as a real turning point after the introduction of Cabernet Sauvignon. The idea was that the Cabernet Sauvignon would give that something extra to the wine by adding complexity and structure.

In 1989, Tenuta di Bossi had also started using barrique in the maturation and aging processes. In this vintage, you feel notes of dark fruit and spices, as well as tobacco and a chocolate-like touch.

These efforts started giving optimal results in the 1995 vintage. They call it a Super Riserva themselves, where the fruit has a strong presence followed by a hint of spices and a balsamic undertone.

We then continue to the 1997, a year which is considered to have been the best harvest-wise during the 1990s. This has contributed a great deal to the wine’s longevity. It is a fresh wine where the fruit and the more green undertones complement each other.

The last three vintages in the tasting, 2000, 2005, and 2007, can be considered as years when the change had stabilized itself. A new era of Chianti Rufina wines from Tenuta di Bossi marked also the entrance into the new Millenium. In all three vintages, you can feel the how the wines have become more full-bodied and complex which was the aim of the Gondi family.

The Merry Party Went On…

Let us now do a recap of the vertical wine tasting. Bernardo Gondi started his career as a wine producer in 1972 and by today he has been a part of 45 harvests at Tenuta di Bossi. This was an occasion they wanted to celebrate by means of this vertical tasting.

Bernardo Gondi’s aim was to steer his wine production in a more international and French direction with the use of Cabernet Sauvignon. This, in order to gain more full-bodied and complex wines with the use of barrique for the aging.

We had the wonderful opportunity to follow this development and transition during the tasting of the ten vintages that I have talked about above. However, it did not end there… Happy and content after such an amazing tasting experience, we were then invited for a tour of the Gondi palace followed by a delicious dinner.

What more could one have wished for…?