On a sunny Saturday afternoon in January, i.e. last Saturday, I went to Siena for the event Wine & Siena to do some heavy wine tasting and meet top wineries. This was the second edition of this wine event which is organized by the Merano Wine Festival people. The beautiful thing with this wine event is that it takes place in different well-known, mostly historical, buildings in Siena.

Thus, you could start at the headquarters of the bank Monte dei Paschi, continue to the Grand Hotel Continental just a few steps from the bank, then walk towards the Piazza del Campo and taste more wine at Palazzo del Rettorato and Palazzo Comunale.

In this article, I will talk about the first part of my wine tastings and discoveries, the “something old”  so to say. I say “something old” because they are top wineries and wines that I already know and have tasted. There is a heavy focus on Tuscany, as was to be expected at a wine event in the heart of Tuscany. However, I hope you will enjoy the reading anyway…

Another thing, most of the live videos below are in Italian, we talk a bit of English only in the last one. I apologize for that.

White wines from the North

Let’s start with a winery that is not Tuscan, but I actually met them and tasted their wines for the first time last year at Wine & Siena. The winery is Eredi di Cobelli Aldo and it is situated in Sornì di Lavis in Trentino. They are three brothers, Devis, Tiziano, and Ivano who manages the winery. 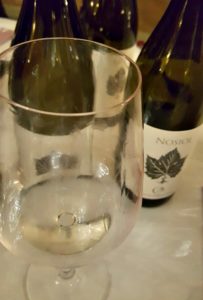 It was nice to meet them again and taste their wines Nosiol 2015 and Gess 2015. Nosiol is a 100% Nosiola wine which is an indigenous grape variety in Trentino. This is an enjoyable yet still elegant wine. They tell the story that it used to be a wine that the farmers drank together after a long day of work in the fields.

Gess is a 100% Gewurztraminer wine. The name of the wine comes from the word ‘gesso’ meaning chalk. It refers to the soil in their vineyards which contains a high concentration of chalk (sedimentary rock). I like their Gewurztraminer very much because it is much less aromatic than the usual Gewurztraminer wines and more clean and mineral both at the nose and at the palate. Still, you can perceive the floral and fruity touch, it only adds complexity to the wine in an elegant manner.

In the Land of Brunello

Saturday afternoon in Palazzo Comunale, I passed by the booth of Il Marroneto winery. As I like their Brunello I decided to stop by and taste their wines and do a short Periscope live video. I had not tasted their Ignaccio Rosso di Montalcino DOC before and here it was the 2014 they were presenting. They explained that it, in reality, is a Brunello that they downgrade to a DOC wine. Thus, it is a young Brunello wine where you feel the red fruit and the freshness, or acidity level, very clearly. It is an enjoyable wine to sip on.

The next wine was their Brunello di Montalcino Il Marroneto DOCG 2011 which is the wine with the longest history from their winery. It was first launched on the market in 1980. It is much more structured than the Ignaccio, though you feel the fruit and the freshness here too. It is indeed an elegant wine.

Last, but not least, I tasted their cru Brunello di Montalcino Selezione Madonna delle Grazie DOCG 2011. This is, of course, a 100% Sangiovese wine just as the other two wines. It is the Sangiovese Grosso grape that is used here which in Montalcino goes under the name, Brunello.
This wine is made with grapes from their oldest vineyard which is located close to an old small church called Madonna delle Grazie, thereof the name of the wine. It is a complex, very structured, and full-bodied wine. It has a beautiful presence of notes of fruit, such as black cherry, the classical violet, and a hint of spices. This is more of a wine for meditation rather than to sip on during dinner time.

Castelnuovo Berardenga – A Part of the Chianti Classico District

On Sunday morning, I, actually, headed for some more Tuscan wines, namely to taste the Chianti Classico wines. Here I ran into Valeria Losi from the Agricola Losi winery which is situated in the Castelnuovo Berardenga district close to Siena.

Since I know their wines and have already tasted most of them, I chose to only try out their Querciavalle Chianti Classico Riserva DOCG 2011 that they are launching this year on the market. In fact, they will be presenting it in two weeks at the Anteprima Chianti Classico Collection in Florence. At Wine&Siena, we got a sneak peek already and the possibility to taste it. It is made with 95% Sangiovese and 5% Canaiolo grapes. This is a full-bodied wine with notes of ripe berries, spices, and a hint of under vegetation. It has elegant and smooth tannins.

Of course, I could not contain myself from doing a live video with Valeria too in order to show off this very interesting wine to my followers. Thus, we also started talking a bit about the concept of zoning. That is, how the terroir of different sub-zones within the Chianti Classico area has particular characteristics which make their wines stand out from other sub-zones. We hope to be discussing this interesting concept more in-depth very soon in another live stream.

Well, of course, I could have structured the article as 4 “Old Friend” wines I tasted at Wine & Siena, but it sounds cool with a bonus winery. 🙂 Here, I will talk about Villa La Ripa because they are a small gem close to Arezzo and they are having a lot of well-deserved success lately. They produce the IGT wine Syrah-Syrah which is a 100% Syrah wine. (That was a lot of Syrah…) 😉 At the first sip you feel the notes of fruit, then after a while the notes of spices and the more balsamic touch come forward.

They also produce the rosé wine Spazio Libero which is a 50% Sangiovese and 50% Syrah wine. The very interesting and particular thing with this wine is that they use an innovative technique with inert gas that protects the wine against oxidation during the vinification process.

Next Step – Next Article About “Something New”

This was a short journey through some of the wines I tasted at Wine & Siena last weekend. I hope you will find them interesting and that they will peak your interest too. There are always too many wines to taste and too many wine producers to meet and to talk to. Therefore, I apologize for not being able to mention them all. However, I will post some photos of other wines at my Instagram account during the coming weeks.

The next part of this article, I will publish in a couple of days. Stay tuned!

Did you like this article? Then feel free to sign up for my newsletter here to get more wine news and social media tips.