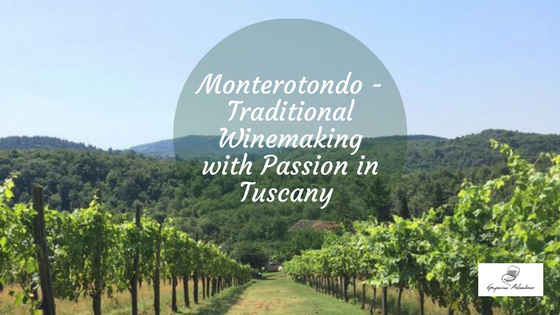 On a Tuesday in early December 2016, Saverio Basagni from the Monterotondo winery in Gaiole in Chianti, who is into traditional winemaking, was a guest at my #WinesOfItaly #LiveStream. Livio Del Chiaro was helping out with the translation into English. Saverio was in the wine bar of Bianca and Livio while doing the live stream. The altitude in Gaiole makes wonders for the wine but can be a hinder when it comes to having a good internet connection. 😉

Monterotondo is a farm which existence can be traced as far back as to 1056, though it has only been in the property of the Basagni family since 1959. The property was bought by the grandfather of Saverio Basagni and today it is Saverio who runs the winery together with his wife, Fabiana. A part of the estate has been turned into an agritourism. So, if you want to experience some countryside living during your holiday, this is the place to go. They also give you the possibility to get a glimpse of the daily work in the vineyard.

This is a very small organic winery which is situated at 550-600 m.a.s.l. The altitude and the territory give special characteristics to the Chianti Classico wines such as freshness and distinct fruit aromas. Fabiana’s and Saverio’s aim is in fact to produce a Chianti Classico wine which stands out, and where the characteristics of the territory are what makes the difference.

The estate comprises 3,5 hectares (8,6 acres) of vineyards where they cultivate the grape varieties Sangiovese, Canaiolo, Colorino, Malvasia Nera, Mammolo, and Malvasia Bianca. As mentioned before, Monterotondo is an organic winery and they are organically certified since 2003. Lately, Saverio is also thinking about venturing into the area of biodynamic farming. Still, it is only in an initial stage and he is pondering which biodynamic methods that could be beneficial to his wine production.

Valentino Ciarla asked a question in the beginning of the live stream, namely:

What type of soil do you have at Monterotondo?

The answer is sandstone and galestro. This type of soil gives a lot of minerality to the wine.

Now, Valentino already knew the answer, but it was a good question with an educational purpose. In that way, the viewers who were not as familiar with the Gaiole territory could learn more about the soil composition.

Saverio was born in Florence but decided around 20 years ago to dedicate himself to restore the family winery. When replanting the vines and starting to produce a high-quality wine, he was convinced that he wanted to make a traditional Chianti Classico blend. Chianti Classico wines must contain a minimum of 80% Sangiovese and the other 20% can be a mix of local grape varieties or the international grapes Cabernet Sauvignon and Merlot.

Instead of using international grapes, Saverio decided to only use local native grapes to cover the other 20%. Here we are talking about grapes such as Canaiolo, Colorino, Malvasia, and Mammolo,. Therefore, he calls himself a traditionalist. They produce three different wines, namely Sasso Grosso Malvasia Bianca di Toscana IGT, Vaggiolata Chianti Classico DOCG, and Seretina Chianti Classico Riserva DOCG.

One of the challenges when he started out 20 years ago, was to make people understand that Chianti Classico historically was something else than what was the general trend in those years. That is, to be one of the few who opted for a return to blends with local native grapes rather than focusing on more international grapes.

Saverio believes in communicating the local territory through his wines. He also believes that passion and tradition are important factors for a wine producer. He stresses that it takes a lot of determination, passion, and willpower to be a successful wine producer.

To learn more about Monterotondo winery and their Chianti Classico wines, you can listen to the entire episode below.

Sign up for my newsletter to the right if you want to get more info about the next #WinesOfItaly #LiveStreams.

18 thoughts on “Monterotondo – Traditional Winemaking with Passion in Tuscany”