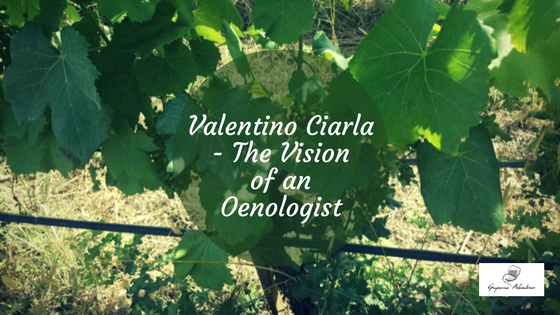 At WinesOfItaly LiveStream on November 15th, my guest was oenologist Valentino Ciarla. Valentino comes from a family in Lazio with a long tradition as vine growers and winemakers. He studied enology at the University of Florence and then worked around Italy as well as abroad, for example in South Africa and in France, to gain experience. He also worked for Antinori for three years after that. Since 2004, he is working on his own as a consulting winemaker and oenologist for about 25 different wineries, mainly in Tuscany. Valentino Ciarla belongs to the Matura Group, which is a group of 9 oenologists in Italy who support, share knowledge and experience with each other. Some of the oenologists in the Matura group also cover wineries in other parts of the world.

The First Approach with a Winery is Human

Valentino talks about how you need to show your human side and that you cannot hide anything because you need to show who you are in order to be able to build a good working relationship with a winery. Thus, according to him, the most important part is to be human and then afterward you can enter into more technical discussions. When I was listening to Valentino saying ‘human’ several times that Tuesday during our #WinesOfItaly #LiveStream, I could not help thinking directly of Bryan Kramer and his #H2HChat where there’s a huge applause sounding when the guest on the show says the word ‘human’. Bryan Kramer launched the concept Human to Human (#H2H) in early 2014, meaning that the approach in marketing nowadays needs to be human to human. In the world of wine and enology, it seems just as important to have a human approach in order to succeed.

During this talk with Valentino, we discussed everything from how he plans his work, his favorite grape, to how he believes the harvest is the most important period and thus focus a lot of his work on that.

Planning the work week or month can be difficult sometimes according to Valentino. This is because he believes that you need to be flexible and able to rearrange your schedules on very short notice in order to give help where it is needed. Especially during the harvest time, he stressed that he works from week to week, without any long-term planning.

His favorite grape, which came up in a question from one of the listeners is, on the one hand, Sangiovese, of course, as he mainly works in Tuscany and earns his daily bread from that grape. He considers it to be a grape that is not always easy to work with but very enjoyable to drink. Another favorite of his is the Syrah grape.

During the harvest period, he spends most of his time in the vineyards. This is because he is of the belief that when you cut a bunch and pick the grapes you have already done 90% of the choice you can make. The quality comes from the vineyards, as you need good grapes in order to produce a high-quality wine.

To learn more about Valentino’s work as an oenologist and how he looks upon the work in the vineyards and the winery, listen to the live stream below.

Would you like to get the latest news about the next live streams, feel free to sign up for my newsletter in the sidebar at this page.