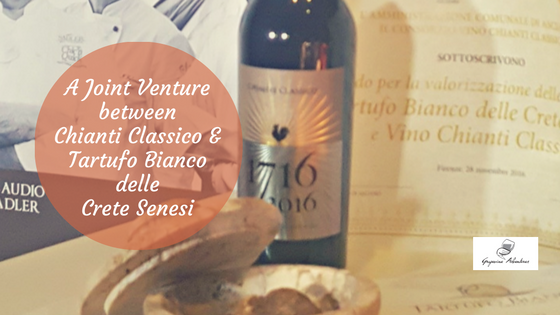 Some week ago, the consortium of Chianti Classico presented a new initiative with tartufo bianco (white truffle) going on right in these days. This year, as most of you might know, Chianti Classico is celebrating 300 years of grand history. It was in 1716 that Grand Duke Cosimo III of Medici made a public announcement about delimiting some areas which were especially suited for producing wine. Thus, he defined the production areas of Chianti, Pomino, Carmignano, and Valdarno. Today, to celebrate these 300 years of wine history, Chianti Classico has been organizing a long series of events all through 2016. The event regarding white truffle and wine that I will talk about here is happening right in this moment in Asciano in Tuscany.

This is probably one of, if not the last Chianti Classico event this year to celebrate their 300th anniversary. The Black Rooster is teaming up with the White Truffle delle Crete Senesi. The white truffle in question is produced in a controlled manner in the district of Asciano, which is a small town situated a bit south of Siena in Tuscany. The soil here is of clay, thereof the name crete senesi, i.e. the clay of Siena.

As mentioned above, Chianti Classico has partnered up with the Tartufo Bianco delle Crete Senesi in Asciano to create four days dedicated to wine and food of excellence. In particular, it is the wines of the sub-association Classico Berardenga – Viticoltori di Castelnuovo that will be paired with the white truffle this weekend.

The event started on December 8th and will continue until tomorrow December 11th with exhibitions, guided visits to local museums, cooking shows, wine & food tastings, dinners, and much more at the Mostra Mercato in Asciano. Tonight, for example, there is the gala dinner where very well-known Italian chefs will present their creations paired with Chianti Classico wines. The chefs are:

On December 11th (tomorrow), you have other wonderful possibilities to taste delicacies such as a cooking show where they will be making pasta with truffle, a seminar on the use of the truffle in older days, a vertical tasting of Italian sparkling wines, etc. The event ends with a dinner, of course, with white truffle dishes and wine prepared by the chef from the restaurant Giorgione Alla Via Di Mezzo in Montefalco, in Umbria.

A collaboration, or partnership, between @chianticlassico, the subzone of Chianti Classico Castelnuovo Berardenga, & Tartufo Bianco delle Crete Senesi was entered and celebrated today at a press conference at #StazioneLeopolda. 🍾🍾🍷🍷 As #chianticlassico is celebrating their #300years this year, this was to announce yet another of many initiatives to make it into a grand celebrative year. … From December 8th to 11th, you can enjoy tastings, dinners, and other events of #tartufobianco and Chianti Classico wines from #CastelnuovoBerardenga at the Mostra Mercato del tartufo bianco delle Crete Senesi in #Asciano. … #grapevineadventures

My Tasting of Chianti Classico and White Truffle

After listening to the representatives from the consortium of Chianti Classico, the different organizers, and chefs, as well as the Classico Berardenga association, present the event in Asciano, we also had the opportunity to taste some goodies. We thus had a taste of tagliatelle al tartufo bianco paired with a Chianti Classico Sottolaia 2010 from Azienda Agricola La Lama. This fruity, complex, and smooth 100% Sangiovese wine was a delightful so-called regional pairing with the truffle from Asciano.

So if you are in the area around Siena in Tuscany this weekend you should definitely pass by Asciano and try some white truffle dishes paired with Chianti Classico wines.