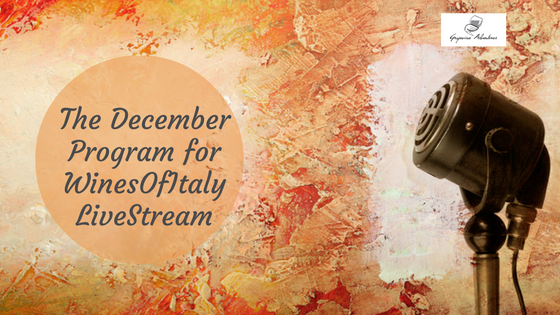 The program for the #WinesOfItaly #LiveStreams during December is ready. The guests are some amazing wine producers here in Tuscany. After having had some different types of guests during the last few weeks, with the oenologist Valentino Ciarla and Stephanie Davis & Valerie Caruso from the podcast Wine Two Five, I am now back to Italian wine producers again. Then, just before Christmas, we will do something a bit different…

On Tuesday, December 6th, my guest will be Saverio Basagni from Monterotondo Winery in Gaiole. He produces wine in the Chianti Classico area and he has a philosophy all of his own which we will hear more about on December 6th. As a bit of a preview, he decided to make without an oenologist and thus, just as, for example, Mariangela Parilla at Tenuta del Conte winery in Cirò Marina, to make all the decisions on his own. This way he can stay true to his ideas and produce organic wines of high quality in his own way. My co-host will be Livio Del Chiaro, as Saverio does not speak very much English. Thus, we will host it and translate what Saverio talks about together.

On Wednesday, December 14th, I will have two guests, namely the brothers Matteo and Nicola Cantoni from Fattoria di Fibbiano in Terricciola, Tuscany. Matteo was my guest already back in May. However, I asked if he wanted to come back on WinesOfItaly and talk more about their winery, as it was a big success last time. As we with Valentino Ciarla talked about a day in an oenologists life, so to speak, I wanted to apply the same model here. Matteo will talk about a typical day when he is out promoting his wines all over the world, and how he manages the commercial side. Nicola will, on the other hand, talk about a work day in the vineyard and the wine cellar as well as his take on this year’s harvest.

On Tuesday, December 20th, we will do something fun and revert the roles so Livio Del Chiaro will be the host and I will be the guest. This was the idea of Bianca Ciatti and Livio to celebrate 1 year of WinesOfOtaly LiveStream in a different way. The temporary title is A Swedish Wine Blogger in Florence, however, it could undergo changes during the next few weeks. Anyway, the idea of Livio is to ask me questions about my whereabouts in Tuscany and Italy attending wine events, meeting with wine producers, and writing about it all here on my blog.

The platform has now changed again, sorry for that, but things change fast in the live streaming world. Most of the time, I will be using BeLive.tv and stream to my personal Facebook page, but occasionally if I have more than one guest I will use one of the other platforms. Soon I will provide a link to sign up for the different live streams and to get more info about them. Hope you can join us!

20 thoughts on “The December Program for WinesOfItaly LiveStream”