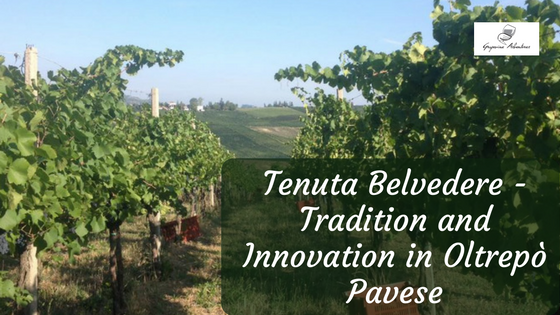 My first encounter with a wine bottle from Tenuta Belvedere was when I visited Fattoria di Fibbiano earlier this spring and Giuseppe Cantoni told me about his nephew making wine in Lombardia. Right then, I did not think much about it. However, this summer when I visited Fattoria di Fibbiano another time and heard Matteo Cantoni talk about his cousin Gianluca Cabrini producing wine in the Oltrepò Pavese area again, I became very curious. So I got the phone number and contacted Gianluca. I then had Gianluca and his wife Federica as guests at my #WinesOfItaly #LiveStream in the beginning of October and finally met them in person at the Autochtona wine event in Bolzano a month ago. I am very happy to have gotten to know them and, of course, to taste their wines. Last weekend I met with Federica and Gianluca from Tenuta Belvedere again in Milan and we went for dinner, so I felt very guilty for not having had time to finish this article. Anyway, finally I am done so read on to find out more about their winery and their wines…

In this area, the Pinot Noir has its own specific character and place and it is used for the production of the Oltrepò Pavese Charmat and Metodo Classico wines. Pinot Noir can, however, also be vinified as a white wine which is done at Tenuta Belvedere with the Pinot Nero IGT Provincia di Pavia or be used for the production of red wines. Riesling, the so-called Italian Riesling, is an important grape variety for winemaking in the Oltrepò Pavese area. The Bonarda can create a bit of a confusion as it in Piemonte (bonarda piemontese) is a grape variety, while it here in this case in Oltrepò Pavese refers to the DOC Bonarda. The DOC Bonarda is produced with the grape varieties Croatina, Barbera, Uva rara, and Vespolina.

Having briefly described the Oltrepò Pavese territory, we will now focus on the Tenuta Belvedere winery itself which is situated in the Montecalvo district in this area. The winery dates back to the late 19th century, but it was only in the post-WW II period that the production became more quality and business oriented with the grandfather of Federica. It has thus always been a family run winery and continues to be so also today with Gianluca having taken over the main management together with Federica. What struck me already from the beginning when talking to Federica and Gianluca, is that they are very positive and dynamic people who are not afraid to try new things and ’adjust’ as they go. They are a young winery in the sense that they took over and re-started the family wine production a few years ago. Their mission is to try and mix new technology with traditional methods. Except for using new technology, they also have the goal of working more in line with Mother Nature and with an as low environmental impact as possible. They only use organic fertilizers and substances for the treatment of the vines. Tenuta Belvedere is a member of both FIVI (Italian federation of independent vignerons) and Vin Natur (Association of natural vine growers) thus working to produce as natural wines as possible. Furthermore, they do not add any sulfites in the red wines and try to limit the use of sulfites to a minimum in the white and sparkling wines. 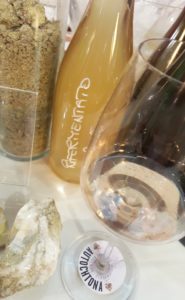 What about the soil then? Well, the winery is situated, as mentioned above, in the Montecalvo district which is in the middle of Pinot Noir land in the Oltrepò Pavese area. The terrain here consists typically of calcareous and clay soil with marine origin. The temperature variation between night and day in this area also provides good climatic conditions for the production of Pinot Noir. Regarding their smaller Riesling vineyards, they are on mining terrain and the soil is limestone with a layer of chalk. This kind of soil gives a good level of minerality to the wines.

Let’s now talk about the winery that they renovated three years ago. It is divided into three different areas or sectors that follow the different production steps: winemaking, bottling/storage, and refinement/aging. They use steel vats and cement tanks for the different winemaking processes and tonneaux of French oak for the aging of the Pinot Noir and Riesling wines. Montecalvus, their red Pinot Noir wine, is still in the aging process being too young to be commercialized yet. When it comes to the sparkling wine, m’Ami, it is made with the Charmat (autoclave) method for the moment. However, they have a set of sparkling wine produced with the Champenoise method which is still resting on the lees and will be ready for consumption only in a couple of years.

The Wines of Tenuta Belvedere

Federica and Gianluca produce five main wines, namely m’Ami Spumante Extra Brut, Riesling DOC dell’Oltrepò Pavese, Pinot Nero IGT Provincia di Pavia, Bonarda DOC dell’Oltrepò Pavese, and Coccìnea Croatina provincia di Pavia IGT. However, as said before, they are a very dynamic duo trying to develop and move forward constantly which brings two other wines into the game. There is the Montecalvus which is a 100% Pinot Noir red wine that I briefly mentioned above. I had the opportunity to taste a sample of this wine in Bolzano at the Autochtona wine event, and I liked it very much even though it still needs time to reach its full potential. However, it already has a clean taste and a very elegant character. The second one, is Wai which is a 70% Pinot Noir and 30% Italian Riesling vinified as a white wine. It is a non-filtered wine which has gone through a refermentation in the bottle. This is a very interesting wine with a strong character where you feel the presence of the Pinot Noir. You feel the Oltrepò Pavese terroir in both these wines and I believe that they furthermore clearly expresses the so-called ‘personal brand’ that Tenuta Belvedere slowly is trying to create and develop. 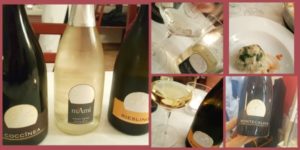 Returning to the other wines, m’Ami Spumante Extra Brut is a 100% Pinot Noir which is produced with the best, or most elegant, part of the must. As mentioned above, it is made with the Charmat method which means that the second fermentation is made in autoclave. It is a well-balanced sparkling wine with both floral and fruity notes and a mineral touch. The Riesling DOC dell’Oltrepò Pavese is a 100% Riesling. I tasted the 2014 vintage of this wine when I was invited for dinner in Bolzano by Federica and Gianluca. It is a wine with a nice minerality and on the palate, you feel the fruity character. The Pinot Nero IGT Provincia di Pavia is a 100% Pinot Nero vinified as a white wine which means that the must does not get in contact with the grape skins. We had this at the dinner the second day in Bolzano and paired it mainly with the starter dish of speck and other cold cut delicacies from Alto Adige. Its minerality and freshness worked well with the quite heavy food.

The two red wines Bonarda DOC dell’Oltrepò Pavese and Coccìnea Croatina provincia di Pavia IGT are both wines with a distinctly fruity character. The Coccìnea has more pronounced tannins than the Bonarda wine, though. There is, of course, a difference in grape varieties also. The Bonarda is a blend of 90% Croatina, 5% Uva rara, and 5% Barbera. While Coccìnea is a 100% Croatina wine. Still, as you can notice, the Croatina is the dominant grape variety in both wines. The Coccìnea is, furthermore, a still red wine while the Bonarda is a fizzy wine. The Bonarda undergoes the first fermentation in cement tanks while the second fermentation to become a sparkling wine is made in inox tanks. Federica told me that her grandfather used to do the second fermentation of the Bonarda in the bottle and that they are aiming at returning to trying out this traditional method very soon.

Some Concluding Words about Tenuta Belvedere

Federica and Gianluca are so nice and friendly and really a lot of fun to hang out with. Their passion for the winemaking and bringing the family winery back into full force just shines through in their eyes. Just as their cousins at Fattoria di Fibbiano, they are really easygoing and sweet people though very goal-oriented and focused on what they are doing. Tenuta Belvedere is, as described above, at the beginning of their new winemaking path, even though it is a family winery with a long history. I think that it is this dynamic combination of tradition and innovation that makes their wines so very interesting. They are still trying out and testing different choices of wines, blends, and techniques which is so fascinating about this winery according to me. They are still not exporting their wines, however, if you would like to try their wines you can just write them via their website.

16 thoughts on “Tenuta Belvedere – Tradition and Innovation in Oltrepò Pavese”