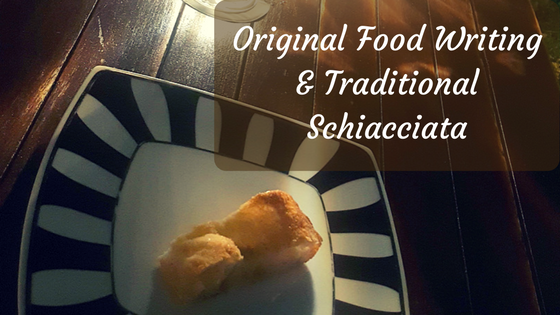 A couple of weeks ago, I was invited by my friend Patrizia Cantini to an event organized by Aset Toscana (Associazione EnogastroAgroAlimentare Toscana). There were two points on the agenda for the evening: to hand over the Kyle Phillips 2016 award and to award a selection of the, according to Aset, eight best schiacciate in Florence and its surroundings. The event took place in the very beautiful inner courtyard garden at Hotel Regency in Florence.

Kyle Phillips was a well-known wine and food journalist who lived in Florence for many years. He was originally from Vermont but arrived in Florence at a very young age together with his father and then more or less just stayed on. He wrote for several American and English magazines and also curated his own website The Italian Wine Review. This price has been instituted in his honour, with the aim to award the most non-conformist wine and food journalist under 35 of the year. The third edition of the Kyle Phillips Award was this evening handed over to Camilla Micheletti who is the editor of “Slow”, which is the magazine of Slow Food. The motivation was that Camilla Micheletti is a journalist without prejudices, who is curious in her profession, has an urge to explore, is composed, as well as candid and brilliant in her writing.

The next part of the evening was dedicated to awarding the eight best schiacciate in Florence. Some of the eight bakeries selected for this occasion were present at Hotel Regency. This was fun as we got to taste each of the eight schiacciate. This while the president of Aset, Stefano Tesi, together with the food journalist Marco Gemelli, were presenting us with their motivations for the selection of the different schiacciate. The schiacciate were accompanied by a glass of prosecco from Paladin. So as you see, even if I am talking food and food writing awards in this article, the wine is always present anyway. The schiacciata is something very Tuscan, if not something quite Florentine. It is a type of focaccia baked in an oven, seasoned with olive oil, and a bit salty.

Tasting #schiacciate toscane at an Aset event at @HotelRegencyFirenze tonight. 8 different schiacciate has been selected by Aset for their excellence. Accompanied by #prosecco @casapaladin … #grapevineadventures

The eight selected and awarded bakeries were the following:

These are some bakeries that you should definitely check out if you are going to Florence some time.

This event was a bit different than the winery visits or wine tastings that I am usually writing about, however, diversity is always a good thing. I cannot say that food writing is my strong side, so I apologize if I am not giving much feedback on the schiacciate other than that they were all very good, each in their own way. However, I was very much enjoying this event and the opportunity to learn more about the Aset association and their activities.