The visit to the winery Cote di Franze close to Cirò Marina in Calabria was a long time coming, as I contacted them already last year when I was in Calabria. However, last year we did not manage to arrange a visit. Then at Vinitaly this year, together with Nadia, I passed by the Calabria pavilion to taste their wines. So, of course, when I went back to the Cirò area this summer I contacted them again. Vincenzo Scilanga, who owns the family winery together with his brother Francesco, now had time to show me around and so I, finally, could still my curiosity. Cote di Franze means more or less the ’plain’ of Franze, which is the name of the location where the winery and most of the vineyards are situated.

Cirò Marina is a small town of about 14,000 inhabitants situated a bit north of Crotone in the northeastern part of Calabria, just by the Ionian sea. It is a coast town which dates back to the period of the Ancient Greek settlers who arrived in Calabria in the VII century B.C. Today the town is better known as the Città del Vino (the City of Wine). 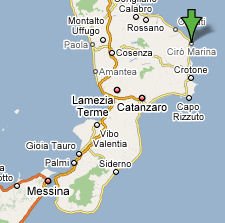 It is here that the Cote di Franze winery is situated, right in the middle of the Cirò Doc district. This is an area where viticulture is a tradition that goes way back in history to the era of the Magna Grecia, just as in a large part of Calabria. In fact, the ancient greeks highly valorized the extremely fertile soil for viticulture that they discovered in Calabria. What strikes you when you visit this area, is that almost everyone seems to belong to a family who owns at least a small vineyard, if not several vineyard lots spread around the countryside outside Cirò Marina. Most of the new small organic winemakers that I am writing about from Calabria, has taken over the management of the vineyards from their fathers or grandfathers thus continuing a tradition inherited from generations back. Several of them have decided to turn the wine production from bulk wine to bottled wine at the same time as they stay true to the traditional techniques of viticulture. 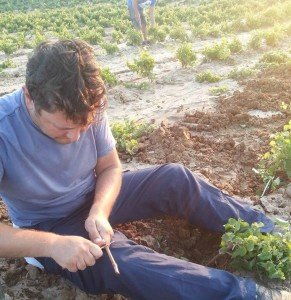 When I talked to Vincenzo, he told me about the grafting methods that are a precious knowledge and heritage that has been forwarded from generation to generation in Cirò. Vincenzo himself has learned it from his father and grandfather and is applying this knowledge in his vineyards at the present day.

Vincenzo and Francesco Scilanga are continuing a family tradition that started out around 300 years ago, when their ancestor, also called Vincenzo Scilanga, started cultivating grapes in Cirò. Since then the family has been vine growers and winemakers from generation to generation, which is a valid proof of their love for the land and their vineyards. It was this passion, that convinced Vincenzo, and his brother to continue the tradition as winemakers. Vincenzo is responsible for the work in the vineyards and the winery, while Francesco deals with the more administrative part. They have no oenologist, instead, Vincenzo himself deals with the winemaking processes and he knows his native grape varieties like the back of his hand.

As many vine growers in Cirò, they live in or around Cirò Marina. However, many of the winemakers often have a small winery building as a part of the house and then they go to the vineyards in the surrounding countryside every day. This is not the case for Vincenzo and Francesco Scilanga, instead, they have built a winery building in the middle of their vineyards in order to have everything close by where they work. 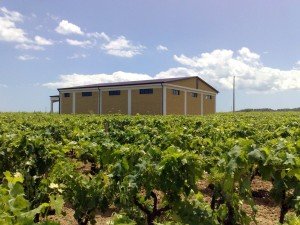 From Vineyard to Vinification

The vineyards of Cote di Franze comprises 22 acres where the soil is mainly clay, but also contains sand and loam. The clay is what gives the Cote di Franze wines its structure and particular aromas. Here they cultivate the indigenous grape varieties Gaglioppo and Greco Bianco. I have talked about the Gaglioppo grape in several articles, as it is the grape variety with a big G in Calabria. It has a need of sun and heat in order to ripen, therefore it grows well in the quite dry and harsh soil of Calabria. The Gaglioppo, furthermore, has a thin skin which makes it very sensitive to rain. The Greco Bianco is also an important white grape variety in Calabria which is used in different DOC wines such as Cirò Doc, Lamezia Doc, Bivongi Doc, etc. It is a grape which ripens late and is generally harvested at the end of September. 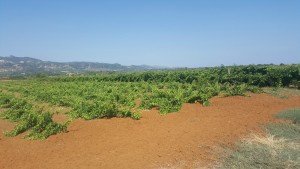 Furthermore, Cote di Franze is organically certified. Thus, they use no chemical pesticides or herbicides but only organical substances, such as sulfur and copper, for the treatment of the vines. They use natural yeasts, as low a level of sulfites as possible, and the fermentation and aging all takes place in stainless steel vats. They do not use any type of oak barrels or barriques for the aging process. The wines produced in this way are indeed different every year, as they are made in a more natural and organic way, which is also the fascinating thing about it all.

When I visited Vincenzo at Cote di Franze, we had a small wine tasting directly in the hangar-like winery building after the short walk around the vineyard. It was very nice to be able to taste the different wines in the same space where they are produced, right in front of the steel vats and other equipment. They produce five different wines, namely Cirò DOP Bianco, Kom’è IGT Calabria, Cirò DOP Rosato, Cirò DOP Rosso Classico Superiore, and Cirò DOP Rosso Classico Superiore Riserva. 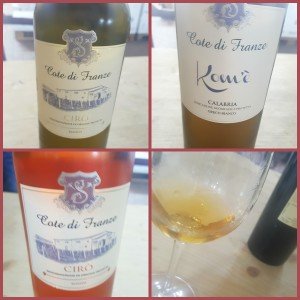 These are all wines where you feel the terroir and the typical characteristics of the indigenous grapes. It is as if you drink a piece of Calabria and its culture when you taste them. The Cirò DOP Bianco has a straw yellow color and notes of fruit, such as apricot, and an aromatic touch. It is a sapid and mineral wine. The Kom’è IGT Calabria is a more recent wine that Vincenzo has decided to make and where he is experimenting with spontaneous fermentation. Its color resembles very much an orange wine, with a more deep yellow, orangey hue. It is an aromatic and mineral white wine with a slightly bitter aftertaste. If we then continue with the Cirò DOP Rosato, it is a rosé wine with a beautiful color which seems like a mix between a cherry red, copper red, and salmon-like hue. It has distinct notes of fruit and minerals, the tannins are present though smooth. All in all, it is a well-balanced rosato wine. 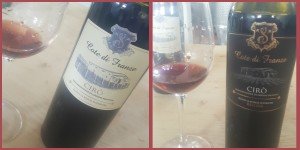 Even though I am a big fan especially of the Kom’è IGT Calabria, but also of the Cirò DOP Rosato, their Gaglioppo wines Cirò DOP Rosso Classico Superiore 2012 and Cirò DOP Rosso Classico Superiore Riserva 2012, of course, were the highlights of the small wine tasting we had at 11 am when I visited the winery. Both wines have lovely intense notes of cherry and plums, as well as a balsamic touch and hints of under vegetation. The 2012 is fresh and mineral while the Riserva 2012, of course, also has its minerality and it is also more full-bodied and structured than the 2012. The tannins are smooth and elegant, and even more so in the Riserva 2012.

My summer weeks in Calabria this year were indeed very much fun, and I am very grateful to the wine producers I visited for driving me around and showing me their vineyards and wineries. Often they also came to pick me up, as I had not rented a car having thought I would stay mostly at the beach and perhaps visit a couple wineries only. In the end, I was introduced to several wine producers and learned very much about their winemaking processes.

Cirò is a fascinating part of Calabria with the Ionian sea on one side, the hills on the other side, and the vineyards covering the landscape in between. Vincenzo and Francesco Scilanga’s winery is situated beautifully here in the middle of the vineyards with a fantastic view of the surrounding landscape. For those of you who are going to Calabria, you should definitely pay them a visit. They produce organic wines with indigenous grape varieties such as Greco Bianco and Gaglioppo, resulting in a true expression of the Cirò terroir.