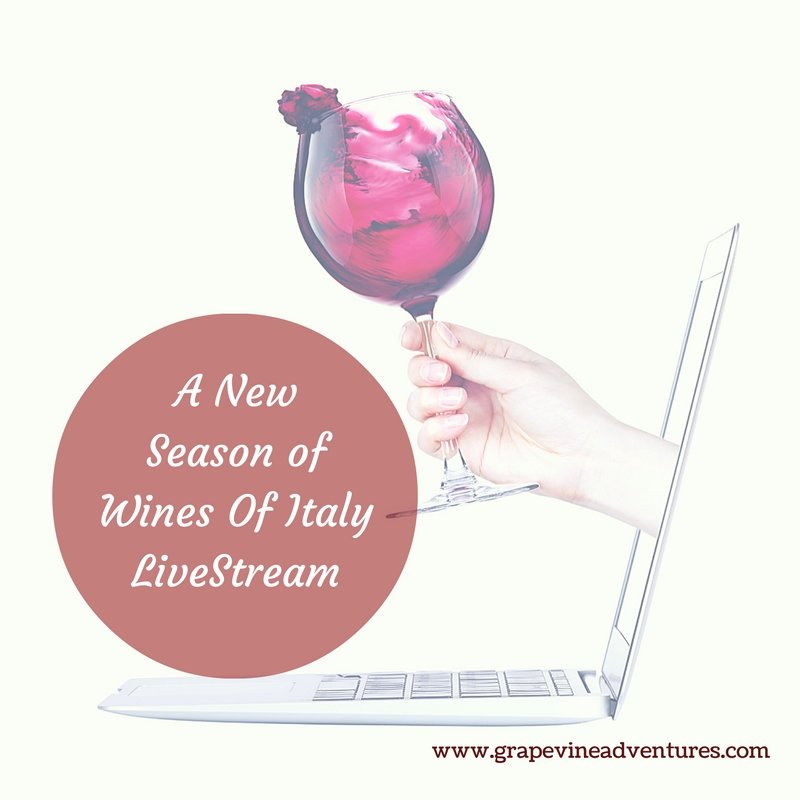 After a month-long summer break, I returned with the Wines Of Italy LiveStream on September 6th with Suzanne Hoffman as a guest. Suzanne (her website and blog is Winefamilies) has just published the book Labor of Love: Wine Family Women of Piemonte which is just as the name hints a wonderful story about wineries in Piemonte lead by women. She stresses that the transition in leadership at these wineries has nothing to do with a feminist struggle, but rather being a natural transition out of love and necessity to continue the family ownership of the wineries. At my live stream, Suzanne talked about the background to her writing this book, how she and her husband discovered Piemonte while living in Switzerland, and how she has formed strong and longstanding friendships with the wine families she has written about. Andrea Costa from Marenco winery, who works with his mother and two aunts in the family winery, was present at our Wines Of Italy live stream. For those of you who missed it, you can watch the replay here and soon it will be up on YouTube.

Suzanne will be back in November to talk more in-depth about the book, and hopefully, we will have some of the women she writes about with us in the live stream, as the harvest will be over by then.

On September 14th my guest was Jennifer Nelson, Wine Antics, who is also a wine live streamer. She talked a bit about her background, that is, how her Masters’ degree in marketing and management combined with voluntary work in the wine industry for several years lead her to look further into live streaming. She wanted to combine her marketing knowledge with her wine experience to carve out a niche for herself. Jennifer started out at Periscope, then continued on Blab to now doing her live shows at Huzza. For the record, I am also doing my live streams on huzza.io now, so no more Blab. For those of you who are interested in following live streams about wine, Jennifer has started the public Facebook group Winestream where most of us publish our live shows. She has some great guests coming up in the next few months so you should definitely check out her live streams with her co-host Jason Stubblefield (Cork Envy). Then you can find the replay of our live stream here.

From Tuscany to Calabria

My next two guests during the coming two weeks in September will span from Central to Southern Italy. First out, on September 20th at 21.00 European time / 3pmEST, is Sangervasio winery which is situated close to Pisa in Tuscany. The winery was bought in the 1960s by Furio Tommasini who mainly produced bulk wine for many years. Since the 1990s, his son Luca is managing the winery and he has changed direction entirely by producing a bottled high-quality wine. They are also organically certified and biodynamic. On Tuesday, you will meet Lisa Tommasini who is Luca’s daughter and who is very much involved in the commercial side of their winery business. Lisa will talk about her grandfather, the development of the winery through the years, the typical traits of their wine production area, and, of course, their wines. Click on the link here to join us on September 20th!

On September 27th at 21.00 European time / 3pmEST, we will head down to Bianco, by the Ionian sea, in the deep south of Calabria. Cantine Lucà winery, owned by Santino Lucà is situated on the outskirts of the small town Bianco where they cultivate indigenous grapes such as Greco di Bianco, Guardavalle, Mantonico, Gaglioppo, and Nerello Calabrese. Their most well-known wine is the Greco di Bianco Passito DOC, however, they also make white as well as red dry wines. Santino Lucà’s family has been winegrowers since way back, but it was only in the mid-1990s that Santino Lucà established his own winery. This was due to the fact that the local cooperative they belonged to and where they vinified their grapes was shut down. On September 27th we will listen to Vittorio Corasaniti, Santino Lucà’s commercial manager, talk about Calabria, the story behind the winery, the terroir, and their wines. Santino himself will probably be present even though he does not speak English. The link to this Wines Of Italy will be up in a couple of days.

As you can see I started out with two very interesting guests, where we learned about family wineries in Piemonte lead by women and about the last year of live streaming becoming a trend that is here to stay. From next week, I will be back with wine producers as guests starting out with Sangervasio winery in Tuscany and ending the month of September with Cantine Lucà in Calabria. Further on, I will mix up the guests a bit and in early October we will talk Italian food and recipes. However, I will get back with more details about that. Stay tuned!