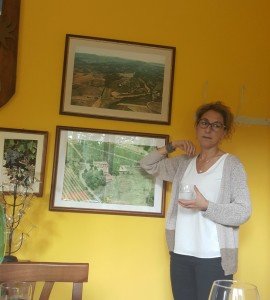 From Father to Daughter

Tenuta Valdipiatta was bought by Miriam Caporali’s father, Giulio Caporali, in the late 1980s as a way to fulfill a dream of his to produce wine. He managed to turn the small farm and the few acres of vineyard on the hills outside of Montepulciano into a successful winery in just a few years. He considers this estate his own secret paradise, or ”Shangri-La”, which is the well-known literary reference that he himself uses. Today he mostly dedicates his time to more literary and historical studies, even though he is, of course, still involved in the agricultural side of the estate business. In 2002, his daughter Miriam took over the ownership and management of the winery after having worked side by side with her father since 1997. She also did a Master in oenology at the University of Bourdeaux in order to prepare herself for the future running of the family winery. Furthermore, they consult an external oenologist as well as Prof. Yves Glories, who is Dean at the Faculty of Oenology at V. Segalen University in Bourdeaux, in the winemaking processes.

A Variety of Grapes

At Valdipiatta winery, they do not only cultivate Sangiovese Grosso for the Vino Nobile, but indeed they grow a wide selection of grape varieties. More precisely, they grow the white grapes Grechetto, Trebbiano, and Malvasia that they use to make their Vin Santo. Since 2010, they also make a Vin Santo Occhio di Pernice (made with red grapes) with Sangiovese grapes. Regarding the red grapes, they grow Sangiovese, Canaiolo Nero, Mammolo, Pinot Noir, Petit Verdot, Merlot, and Cabernet Sauvignon. I will come back to discuss the interesting fact that they grow Pinot Noir and the wine they produce with this grape variety.

The Sanguineto vineyard comprises 12 acres which are divided into 5 micro lots where they cultivate the Sangiovese grapes that are used for the Vino Nobile di Montepulciano DOCG Riserva. Both Sanguineto and Vigna d’Alfiero were planted in the 1960s by Alfiero Carpini and they were planted according to the technique one used in the past with a large spacing between the vines. 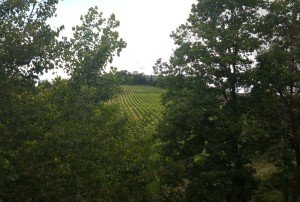 Valdipiatta winery is in their second year of conversion to become fully organic and certified. Miriam told us how she believes it to be very important not only for the winery in itself but also to, in a broader perspective, start becoming more aware of the nature around you and take responsibility for how you pursue your farming activities. The nature around us is something precious and thus it is important nowadays to be sustainable also for winemakers and wineries. So far only around 10% of the wineries that are members of the Consorzio del Vino Nobile del Montepulciano are organically certified, though a certain number of wineries are in the process of converting to organic farming. Processes such as green manure and treatment of the vines with only organic substances are important in order to reduce the use of chemicals to a minimum. At Valdipiatta, they are using oat, mustard, and protein-based peas for green manure this year. To read more about organic farming, see the article Organic Farming at Montemaggio.

Valdipiatta Pinot Nero IGT Toscana 2007
They harvest a first part of the Pinot Noir grapes at the end of August and beginning of September by picking the main grape bunches and start with the winemaking process. At the end of the harvest, more or less a month later, they harvest the femminelle, i.e. the buds that grows out again on the vines. During recent years, the femminelle have been more or less as many in numbers as the main grape bunches. The femminelle has a lower sugar concentration and a higher acidity, therefore, they do a mix of the main bunches and the femminelle where the percentage of each is dependent upon their quality during the year in question. For example, 2007 was a very warm year and thus they used more femminelle in the mix in order to add a bit of more acidity. They do not produce the Pinot Noir wine every year though, only in those years when they consider the grapes to be of high quality. The first year they produced and bottled Pinot Noir was in 2004.

Now, you might think that it seems very unusual to produce Pinot Noir in the heart of the Nobile di Montepulciano area in Tuscany. We were very surprised too at first when Miriam told us that they also produce a Pinot Noir wine. However, their Pinot Noir is indeed very interesting. We tasted a 2007, which is an elegant wine with smooth tannins. The only thing is that it is a wine which needs a long maturation in the bottle, thus they let it age or mature for a longer time before they market their Pinot Noir wine. This Pinot Noir you can pair with meat as well as with seafood. 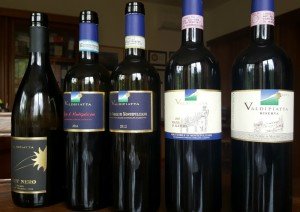 What is then typical for this vineyard and the wine? Well, the Vigna d’Alfiero comprises 7,5 acres of vineyard, but it is mainly grapes from about 2 acres of these at the top of the hill that are used to produce this Nobile di Montepulciano DOCG Vigna d’Alfiero. The grapes from Vigna d’Alfiero has a touch of something very sensual, smooth, and full-bodied, with very distinct notes of fruit. Miriam herself, says that it is a vineyard which is bold, not at all timid, that wants to give pleasure, and that produces wines with very smooth and silky tannins. It is 100% Sangiovese and, indeed, it is a very elegant and well-structured wine with a long finish.

Vino Nobile di Montepulciano DOCG Riserva
The grapes to produce this wine comes from the Sanguineto vineyard, as mentioned before. However, in some years it is a mix of grapes from the Sanguineto vineyard and the 2 acres of the Vigna d’Alfiero that is used to produce the Nobile di Montepulciano DOCG Vigna d’Alfiero. As the grapes that are not used for this latter wine, in that case, are used for the Riserva. The Sanguineto vineyard, in contrast to the Vigna d’Alfiero, is more austere and introvert if we are to continue to attribute more human feelings to the vineyards. It is a 100% Sangiovese with notes of red fruit, black pepper, intense aromas, and elegant tannins. The ageing takes place in Allier oak barrique for 12 months followed by another 24 months in barrels of Slavonian oak. Thereafter, it is matured for another 6 months in bottle.

Valdipiatta Winery is situated beautifully just outside Montepulciano in Tuscany. They produce a wide selection of wines ranging from Chianti Colli Senesi to Rosso di Montepulciano DOC and Vino Nobile di Montepulciano DOCG wines. They also produce a Pinot Noir and Vin Santo, both well worth to purchase and taste. Just write or give Miriam Caporali a call to book a visit or wine tasting, would you like to visit Tenuta Valdipiatta.

7 thoughts on “A Taste of Nobile di Montepulciano – Valdipiatta Winery”