My first encounter with Cantine Lucà was at Vinitaly earlier this year. While passing by and saying hello to Sergio Arcuri, together with my friend Nadia we asked him what other producers in the Calabria pavilion that he could recommend. One of those he said we must try, was the Greco di Bianco Passito DOC of Cantine Lucà. So, among others, we passed by their stand, tried the passito and liked it very much. A couple of weeks ago, during my holiday in Calabria, I then had the opportunity to go and visit this winery in Bianco in the very south of Calabria.

Bianco is a small town of around 4000 inhabitants in the province of Reggio Calabria, in the very south of Calabria by the Ionian sea. This small town is situated on the coast in the Locride area, which is also known as the Riviera del Gelsomino (the Jasmine Riviera). Read on to find out more about grape varieties and wine production in the very deep south of Italy.

A Road Trip to Bianco…

Having found out I was going to Calabria for a bit of holiday, Santino Lucà, the owner of Cantine Lucà, and Vittorio Corasaniti, who works for the winery dealing with the more commercial side, invited me to come and visit the winery in Bianco. At times like these, I feel truly fortunate to be able to do what I do. As I was visiting friends in Strongoli, close to Crotone, I did not have a car and Vittorio was so kind to come and pick me up in the morning and drive us down to Bianco. Alright, so he lives in Soverato which is half way between Crotone and Bianco, but still he had to drive like more than 6 hours that day back and forth. I am really grateful and honored that they arranged this whole day to show me the winery, the vineyards, and the area around Bianco. Santino himself is really such a nice person and it was very interesting to learn more about the grape varieties which are typical for the area and the winemaking process for the passito.

During the 3 hour drive down to Bianco, Vittorio told me a lot about the area and the winery. This part of southern Italy was the area of Magna Grecia, i.e. it was very much populated by Greek settlers who arrived during the 8th century BC. Still today you can indeed feel the winds of history blowing around you, or rather you can feel the presence of history and tradition mixed up with modernity. A modernity, which unfortunately in some sense has brought with it exploitation of land and a certain amount of decline and isolation. However, when talking about oenology and wine production, the presence of history and tradition is indeed something positive which provides a connecting thought from past to present, and hopefully towards the future.

The further south we came, it was particular because you could really see how the landscape changes and, of course, it got warmer and warmer. For me, as a former historian writing about nationalism and the Risorgimento in the 19th century, it made my day to actually get a glimpse of Aspromonte from the car, which is a mountain I would like to go hiking on to somehow walk in the footsteps of Giuseppe Garibaldi.

Cantine Lucà – A Winery in Bianco

When we arrived in Bianco, Santino Lucà was waiting for us in front of his small wine shop in the center of Bianco. We then headed directly to his winery which is a newer small hangar-like building with an open space inside where he carries out the different winemaking processes. There is also a wine tasting angle for when they have guests visiting. Right in front of the winery, is one of his Greco di Bianco vineyards with a stunning view of the sea below. 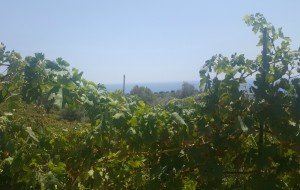 Santino Lucà has built his new winery building close to his own home, which is situated just down the road. They told me that sometimes when they have wine writers, sommeliers, or other guests visiting they organize a lunch or a dinner directly in Santino’s home to make it all more informal and cozy. Their idea is to transmit an experience of the local territory to their guests, not only in terms of wine and food, in order to make them understand the history and the treasures of that part of Calabria.

The Cantine Lucà winery was established in 1996 as the cooperative they belonged to for vinification of the grapes went bankrupt and was closed down. Thus, Santino Lucà decided to start making wine on his own. His family has been vine growers for a long time so that part was nothing new. The winery comprises almost 40 acres of vineyard, where they cultivate mainly Greco di Bianco, Mantonico Bianco, Guardavalle, Magliocco, and Nerello Calabrese. The vineyards are divided into small lots in different areas on the hills around Bianco. They brought me to have a closer look at several of these vineyard lots with a soil of white clay. It was fascinating to walk through the vines under the scorching hot sun facing the hills on one side and the sea on the other. At one of the lots they showed me Greco di Bianco vines which are more than 80 years old, and you could notice the more robust vine stocks. 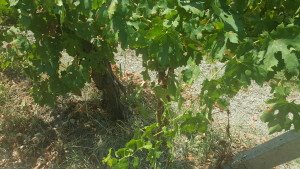 What is interesting regarding this part of Calabria, is that it is a fairly bare landscape with a bit of vineyard here and there and for the rest the cultivation of, for example, wheat and bergamot. Now I thought this was a normal thing, but they told me that up until 40-50 years ago the landscape consisted of vineyards. Apparently, with the second emigration wave towards the larger cities in Italy in the 1970s, many vineyards were abandoned and others were sold off and consequently uprooted. Today, efforts are being made to re-evaluate the land by slowly replanting vines. Another trend for the moment seems to be the cultivation of bergamot in the area. 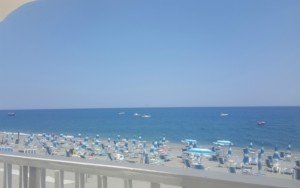 Marasá Bianco IGT
This is a white wine made with the indigenous grape varieties Mantonico Bianco and Guardavalle. Generally, it is a straw yellow white wine with notes of flowers and fruits and a dry taste. Regarding the Marasá Bianco 2014, Santino told me that an unexpected refermentation in the bottle occurred and he thought it was of no use anymore. However, they discovered that the slightly fizzy character which disappears after a short while and the stronger notes of more mature fruits make it into a very interesting white wine. It also has a more orange color which makes it very similar to the nowadays so trendy orange wines. According to me, it is an interesting wine which is very fresh and mineral as well as a bit sweeter due to the strong taste of fruit, but also of flowers. It is perfect for a summer day together with pasta with seafood, as we had for lunch that day.

Marasá Rosso IGT
This wine is made with the indigenous grape varieties Magliocco and Nerello Calabrese. It is a ruby red wine with smooth tannins and notes of dry fruit and vanilla. It pairs well with meat and aged cheese. 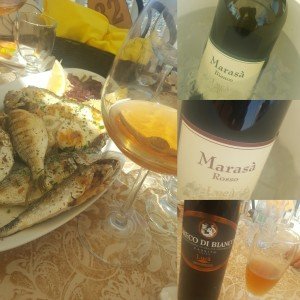 Mantonico Passito IGT
Mantonico is a grape variety which is cultivated in Calabria along the Ionian coast and, especially, in the area around Bianco. The grape is yellow-green of medium size and with a fairly resistant skin. For this passito from Cantine Lucá, the grapes are handpicked in September and then put to wither in the sun on trellises for a bit more than a week. After the pressing of the grapes, the juice is transferred to steel vats and the maturation further on continues in chestnut barrels. It is a fresh but still sweet passito with notes of dry figs and a slightly bitter aftertaste. All in all a very interesting sweet wine.

Greco di Bianco Passito DOC
As mentioned above, this is indeed the flagship product of the winery. Just as with the Mantonico Passito, the Greco di Bianco grapes are harvested in September and then laid on trellises in the sun for a week. The grapes are vinified only when the right concentration of aromas and sugars has been reached. The maturation is done 12 months in steel vats and thereafter 15 months in chestnut barrels. So what is so special about this passito then? Well, it has wonderful and delicate, but still very recognizable, aromas of orange blossom and persistent notes of dry figs as well as dry fruit in general. Sommelier Livio Del Chiaro has defined it as a fantastic and smooth wine with a sweetness that never results disturbing due to its sapidity and freshness. Furthermore, it is a very mineral wine where you feel the closeness to the sea.

A Step Back in History…

After lunch, we went for a drive in the countryside south of Bianco, as they wanted to show me the palmenti which are scattered all around the area. While they were talking about these palmenti in the car, I was thinking “I have no clue what this is” as I had never heard the word before. I wanted to Google the word, but at the same time, I did not want to be too obvious about my ignorance, in the car. LOL Walking through the vegetation we arrived at a first palmento which is a sort of stone structure consisting of one larger and one smaller basin connected to each other by a small opening. These palmenti were used in the Magna Grecia era to press the grapes and then channeling the juice into the smaller stone basin. During the era of the Roman Empire, they were used in a more industrial manner. They are most commonly found in the south of Calabria, but there are also remains of them in, for example, Basilicata and Campania.

Today I visited Santino Lucà @cantine_luca of the winery Cantine Lucà in Bianco, in the very far south of #Calabria. He has a beautiful reality with different smaller lots of vineyards distributed on the hills around Bianco. His flagship product is the Greco di Bianco passito DOC which is an explosion of notes of sea, minerality, and dry fruit. #grecodibianco He also produces a Mantonico Passito IGT, Marasa’ Bianco (a very interesting white wine produced with #Mantonico and #Guardavalle grapes, and Marasa’ Rosso (Nerello Calabrese and #Gaglioppo grapes). Here they showed me one of the over 700 #palmenti, so called natural #wine presses, or grindstones from the period of Ancient Greece. #grapevineadventures

The visit to Cantine Lucà was very interesting and a lot of fun. It is a very beautiful area of Calabria though it might still be a bit hidden due to the fact that it is quite far south. As we discussed, however, it is often more of a mental than a physical distance. Would you want to take a tour to Calabria and visit Cantine Lucà, you can contact them directly as they do help you organize the whole visit logistically. Their Greco di Bianco Passito is indeed a sweet wine with an explosion of aromas, still, being very fresh. Therefore, I highly recommend you to taste it if you have the opportunity to do so.

16 thoughts on “Discovering Cantine Lucà in the South of Calabria”