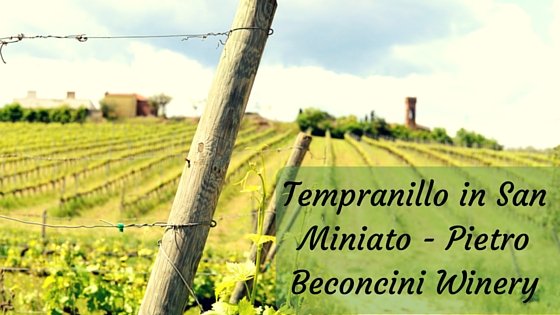 On April 25th we had been told that the rain was going to pour down all day long, but me and my friend Paola Dentifrigi decided to challenge the weather and go on a wine tour anyway. It was a national holiday, as April 25th in Italy is a very important day being Liberation Day, i.e. the day that marked the end of the Italian Civil War as well as of the German, or Nazi, occupation during World War II. Not feeling particularly belligerent, but rather ready to have some fun we headed towards San Miniato and Pietro Beconcini winery in the morning. And the funny thing is that it turned out to be a beautiful and sunny day, perfect for an outing, so we were happy that we had decided to go anyway.

The Road to San Miniato…

As we were driving towards San Miniato, Paola asked me to follow the directions on the navigation app, which is often a clear road to chaos because I have no sense of the direction and I am not particularly good with the GPS either. Often I manage to go in the opposite direction of what the GPS indicates. LOL! However, we arrived in the late morning and were welcomed into the tasting room where Eva and Leonardo started to tell us the story of their winery. Paola had just bought a new camera, so being passionate about taking photos, she wanted to put the camera to use and started snapping photos while we were listening to Eva and Leonardo. 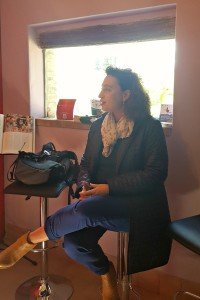 What is typical about the terroir in San Miniato?

Well, San Miniato is situated in the middle between Pisa and Florence and is fairly close to the Tyrrhenian coast. More than 3 million years ago this part of Tuscany used to be the bottom of the sea and thus the soil in San Miniato consists of fossil shells and clay. The calcium in the fossil shells as well as the saline soil provides a lot of minerals which is important to get complex and structured wines. Thus, the salt and the richness in minerals result in easy drinkable and fresh wines.

A bit of history

Leonardo Beconcini took over the management of the winery from his father in the early 1990s. His father had mainly produced a so-called young Chianti wine, i.e. a wine for direct consumption and not for aging. He had started to bottle his wine in 1968. Very soon after taking over the reins of the winery, Leonardo started to re-evaluate and do an in-depth research of the vineyards belonging to the winery and the land around San Miniato together with collaborators and students at the University of Pisa, in order to identify the best and most traditional clones of the Sangiovese grape in the area. These selected clones were then replanted in the most suitable places on the estate in order to be able to produce a high-quality wine. During this research, they then stumbled upon something “strange” in the old vineyard (la vigna vecchia), i.e. some very old vines that they could not define very well at a first glance. To better understand these old vines, they told me that they started to do some micro-vinifications which gave very interesting results. Therefore, even if they still did not know exactly what kind of grape it was they decided to replant it in their vineyards calling it ‘X’. Furthermore, they discovered that these vines were ungrafted, i.e. survivors of the phylloxera which mean that they are something very precious and valuable for a wine producer.

Grape phylloxera is a microscopically small louse that lives on and eats the roots of vines. This disease hit hard all over Europe in the late 19th century forcing wineries to rip up and burn down a great part of their vineyards. At the beginning of the 20th century, for example in France, more than 70% of the old vineyards had been lost.

More about the Tempranillo grape

This is a grape with which you need to be careful as it ripens much earlier and just a few days can make a huge difference for the harvest. They harvest the Tempranillo already in mid- or end of August. This in contrast to the Sangiovese which has a longer ripening period and is generally harvested as late as in October, not being a tragedy if you harvest it a couple of days later.

In 2004, they produced their first bottle, called Vigna alle Nicchie, with this unknown grape variety from the old vineyard (la vigna vecchia) even though they could not label it as a wine with the Tuscan IGT denomination. That same year they further did a DNA analysis of the grape variety and thus finally discovered that it was Tempranillo. An explanation to this can be that as they live along the Via Francigena, the road of the pilgrimage that starts out in Santiago di Compostela or Canterbury, some pilgrim brought with him Tempranillo vines from Spain to Italy. This grape variety has by now completely integrated itself with the Tuscan soil and terroir and adopted typical traits of this area. In 2009, they then managed to get the Tuscan Tempranillo registered under the denomination IGT Toscana.

The interesting detail is that this Tempranillo has since many years, also during the period of Leonardo’s father, been integrated and grown together with the Sangiovese even if they did not know about it and did not know what these old vines were.

Sangiovese and Tempranillo – A wide selection of wines

This is 100% Tempranillo wine. It is aged for 14 months in a mix of French and American barrique followed by 6 months in bottle. It is a mineral and salty wine with notes of fruit and flowers. In the mouth, you feel the acidity which is an influence from the soil of San Miniato, but still also the smoothness and roundness of the wine. The name IXE is a result of the Tuscan way of pronouncing the letter ‘X’, namely ixe.

Just as the above-mentioned IXE, this is 100% Tempranillo. About 70% of the grapes are matured in French barriques and the other 30% of the grapes in American barriques, after which the aging continues in bottle for 8 months. It is a wine with notes of fruit and flowers, and over time as it ages notes of coffee, cacao, liquorice, etc. emerge. It is a very enjoyable wine to drink with a creamy taste and elegant tannins.

This is the more recent Tempranillo wine created by Pietro Beconcini winery. It is made with grapes from an anticipated harvest, in order to get freshness and a lower alcohol content. They call it a rosé wine, even though Eva and Leonardo told me that technically it ought not to be called rosé as the juice has been fermented in contact with the grape skins and also goes through the malolactic fermentation. Therefore, it should more correctly be defined as a red wine. This way of making a rosé/rosato wine starts to become more and more common. This is a fresh and fruity wine that pairs well with most types of food, from cold cuts to meat and fish courses.

Malolactic fermentation, explained very briefly, is a process in winemaking where the malic acid in the grape must is converted to a soft-tasting lactic acid.

This is a 100% Sangiovese wine produced with a selection of the best grapes from their vineyards. These Sangiovese vines were selected by Leonardo in the 1990s from their oldest vineyards and then replanted in the most suitable area on the estate. This wine is the Sangiovese wine which according to Leonardo represents the true spirit of their winery and how they want to tell the story of their estate and their vineyards. An interesting thing about the name is that reciso means ‘cut’ which alludes to the hard and long work of cutting the grape clusters from the vine. The wine is aged 18 months in large oak casks and one year in bottle. It is a complex wine with notes of blackberry and other fruit, as well as hints of leather and roasted coffee. It is a full-bodied and dry wine with smooth tannins, and an aftertaste of dark chocolate.

Maurelo is a wine made of 50% Sangiovese and 50% Malvasia Nera. The Malvasia Nera gives a more smooth and fruity character to this wine. Leonardo himself defines it a bit as the Supertuscan wine of San Miniato. It is aged 12 months in barriques and 6 months in bottle. It has notes of red fruit and vanilla, a smooth and velvety taste and elegant tannins. There is a particular story also behind this wine as Maurleo is a combination of the names of Leonardo and his brother Maurizio. Their father thus came up with this name for the wine to honor his two sons.

This is a blend of 85% Sangiovese and 15% Canaiolo. Here the idea of Leonardo was to make an old-style and very traditional Chianti wine. The aging is done in big barrels of Slavonian oak for 18 months in order to get smooth and elegant tannins and 8 months in bottle. It is a structured wine with notes of violet, leather, and coffee. In the mouth, it is full and round and the taste alludes to the soil and the territory.

The Pietro Beconcini is a unique and very interesting winery in San Miniato and I hope I have managed to transmit their love for their land and territory as well as uniqueness of the discovery of the Tempranillo grape. For me it was a new experience too, as I still did not know the district around Pisa and San Miniato very well when it comes to winemaking. For those of you who wants to learn more about this winery, you can listen to the replay of my #WinesOfItaly blab with Eva and Leonardo here (at the end of the article).