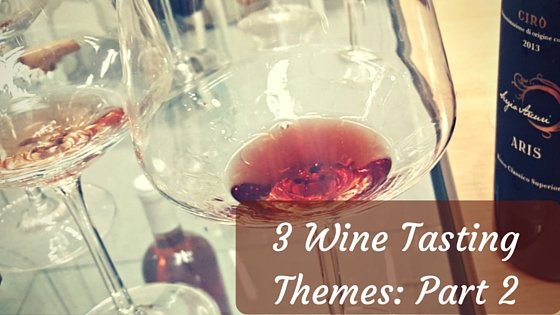 So this article is even more overdue than the last one about me and Nadia Padrin’s wine impressions at Vinitaly 2016 back in April. However, I have not had much time to write articles during the last couple of weeks due to work, so I will try and make up for it all now. In the last article about Vinitaly, I talked more about producers from Northern and Central Italy, while I here will focus on three southern regions, namely Calabria, Puglia, and Sicily. Some of the producers I have written about before on my blog, so you might recognize them and their wines.

1. A Taste of Calabria in Verona…

On the second day of Vinitaly in April, as you perhaps remember from my earlier article, we started out at the Montemaggio stand tasting all their wines and ending with a grappa. A bit dizzy not being noon yet, we headed towards the food and olive oil pavilion again before heading towards Calabria and their Gaglioppo wines. In Calabria, or rather in the pavilion of Calabria at Vinitaly, me and Nadia started out at the first stand we recognized, namely Ceraudo Winery. While I had tasted their wines before when I visited their winery in Calabria last year, it was a new experience for Nadia. We tasted their Grisara, which is a white wine made of 100% Pecorello, and their Petraro, a blend of 50% Gaglioppo and 50% Cabernet Sauvignon. While chatting to the nice girl from Ceraudo working in their booth, Roberto Ceraudo himself came to talk to us while we were sipping at his wines. When I visited them in Strongoli last year, I was mostly showed around by his son Giuseppe, so I only met his father, Roberto, very briefly then. So I do not think he remembered that at all. 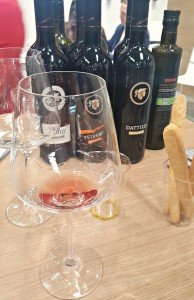 After Ceraudo, we went in search of Sergio Arcuri as I wanted to say hello to him and also to let Nadia taste his wines. We tasted both his rosé (rosato) wine, Il Marinetto (probably the 2015 but I do not remember, sorry…) and Cirò Rosso Classico Superiore Aris 2013. The rosé wine is a fresh and a bit tart wine with a taste of cherry. The Cirò Doc wine has notes of fruit, herbs, spices, tobacco, among others, and a warm, fresh, and fruity taste.

Just a week before, I had spoken to Sergio on the phone to get more details about his winery and Gaglioppo wines for an article I was writing for the American magazine E The Magazine for Female Executives. He is always very helpful, so it was nice to see him again and taste his wines again. We asked him for advice about which other producers in the Calabria pavilion we should try out, and then headed off to follow some of his recommendations. 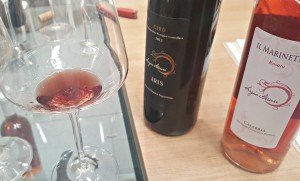 This winery of Gianfranco Pironti is situated in Rogliano in the province of Cosenza in Calabria. Their vineyards are in the Savuto valley (DOC Savuto) at an altitude of 450 to 800 m.a.s.l. This is an area of Calabria that I still have not visited, so it was interesting to be able to taste their wines at Vinitaly. They have two different lines of wine: Radici and Antiche Vigne AV. Within the Radici line, they produce several interesting wines with the grape varieties Magliocco, Greco Nero, and Mantonico, for example, the Savuto Classico Rosso DOC (Magliocco and Greco Nero) which we tasted. This is a structured and warm wine with notes of red fruit, such as cherry.

Sergio had told us that this winery, situated in the province of Reggio Calabria, make a wonderful Greco di Bianco Vino Passito DOC and that we just had to try it out. So we headed towards their booth and Nadia directly asked if we could taste their Passito that we had heard so much about. And, indeed, it is a fantastic explosion of aromas in the mouth. This passito is made with the grape variety Greco B di Bianco. After harvest, the grapes are put on trellises to dry in the sun for around 10 days. The grapes can only be vinified when the right concentration of aromas and sugars are reached. It is a passito with notes of orange blossom and dried figs, as well as a structured and smooth taste. 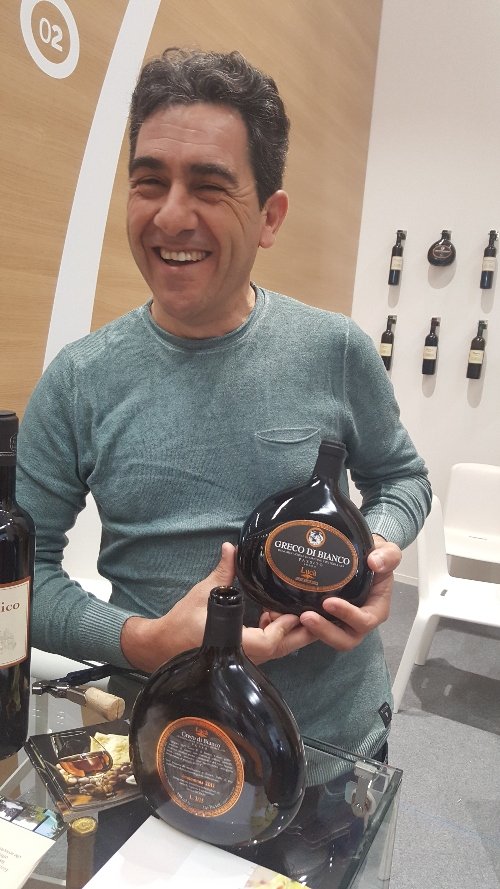 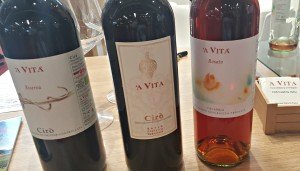 Last summer I had looked up this winery as one of those I wanted to visit while being in Calabria, but it never happened as Francesco and Vincenzo did not have time the week I was there. Last autumn, when I met Francesco from ‘A Vita winery at the presentation of Guide de l’Espresso in Florence, he told me they are cousins. So I then was even more curious to taste the wines of Cote di Franze. Me and Nadia both really liked their wines straight away. They produce a Cirò DOP Rosato on the basis of 100% Gaglioppo, which is smooth and elegant. We also tasted their Kom’è Greco Bianco wine and Cirò DOP Rosso Classico Superiore. The vintages of the wines I actually do not remember, I think the Rosso Classico Superiore was 2013 or 2014, sorry for that. This 100% Gaglioppo Rosso Classico Superiore is a very interesting red wine with notes of flowers, juniper, prune, spices and much more. It is a well-structured wine with smooth tannins. Next time in Calabria, I definitely want to visit Cote di Franze! 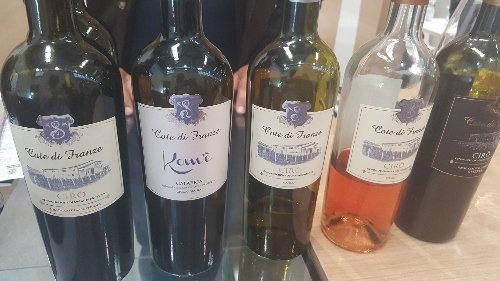 2. One Stop in Puglia

We, unfortunately, did not have much time to tour the Puglia pavilion, however, I wanted to pop by and taste the wines of Cantine Losito. We connected on Instagram and Giovanni Losito had sent me an email before Vinitaly inviting me to pass by and taste his wines. The winery is situated in the Gargano district in the north of Puglia. They produce wines on the basis of indigenous grapes such as Nero di Troia and Primitivo, as well as other wines made with Fiano, Chardonnay, Moscato, and Cabernet Sauvignon. The Nero di Troia is a full-bodied wine with notes of blackberry, red currant, violet, and spices. The Primitivo is a well-structured wine with notes of ripe red fruit, spices, and chocolate. To hear more about the winery and their wines you can listen to my interview with Giovanni at my #WinesOfItaly blab here. 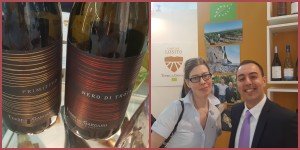 3. Sicily – from Palermo to Etna

When we made a tour in the very crowded area of the wine producers belonging to Vivit (Vigne, Vignaoili, Terroir), we made a stop at the booth of Porta Del Vento. This is a Sicilian winery in the district of Camporeale close to Palermo. There were so many people that it was very difficult to taste any wines, but we managed to reach the booth after a while. They produce Mira, a sparkling wine made with the grape Catarratto and with the Champagne method (metodo classico). This was the first time I tasted a sparkling wine made with Catarratto, and it is very interesting and definitely something to recommend. Furthermore, they produce Porta del Vento, which is a full-bodied and fresh 100% Catarratto white wine with a great aging potential. Saray is another of their white wines, 100% Catarratto, where the juice is fermented together with the grape skins for 30 days in steel vats. Thereafter, it is aged in oak barrels for two years which gives it a great character. Carmelo Corona, who writes for www.lucianopignataro.it, has described a Saray 2009 as a complex wine with notes of spices and ripe fruit as well as a touch of magic. We only tasted their white wines, however, they also produce a Maquè rosé, a red Maquè wine made from the grapes Nero d’Avola and Perricone, a Maquè made from Perricone, and the Ishac which is 100% Nero d’Avola. Perricone is an indigenous and quite rare grape variety in Sicily with very thick grape skins and a strong blue color. 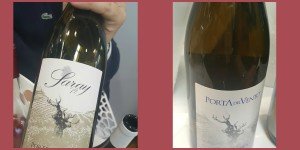 This is a winery I came in contact with by chance on Twitter a couple of months ago. Sonia Spadaro Mulone is full of energy and passion for her vineyards on Etna. The vineyards used to belong to the family of her husband, however, now it is Sonia who together with her husband owns and manages the winery and the vineyards. They are sharing the experience of the Benanti family and their winery with whom they are very good friends. Sonia told me that Santa Maria La Nave is the only winery cultivating and producing a Grecanico Bianco wine on Etna. This Millesulmare Sicilia DOC Bianco has a straw yellow hue with golden highlights and notes of mountain fruits as well as pineapple, and a strong influence of the volcanic soil. Their red wine is called Calmarossa Etna DOC Rosso and is made from the grape varieties Nerello Mascalese and Nerello Cappuccio. It is a wine with notes of flowers and fruit, under vegetation, and a bit of vanilla and cinnamon. It is a structured wine with smooth tannins. To learn more about this winery you can listen to my #WinesOfItaly blab with Sonia here. 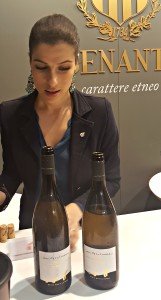 This was the second and last article about Vinitaly, so do not worry I will not disturb you with any more articles about an event that happened more than a month ago. However, I felt it was important to write also about these three southern themes or regions, as they indeed produce some very interesting wines. There is a bit of a strong focus on Calabria, which is mostly due to the fact that I know a lot of them. Hope you enjoyed reading the article.