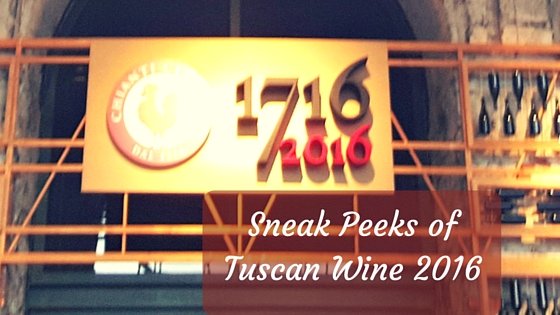 As you have probably understood by now, February is the month when you can get all the sneak peeks of the Tuscan wines being launched during the year. Together with my friend and fellow sommelier Nadia Padrin, we have so far covered the sneak peeks of Nobile di Montepulciano (covered by Nadia), Tuscany Taste, (the sneak peek of smaller consortiums such as Consorzio Montecucco, …), Consorzio Vino Chianti (#Chiantilovers) and Chianti Classico Collection. The Consorzio del Vino Chianti Classico Gallo Nero celebrated 300 years this year too, as the Grand Duke Cosimo III of Medici in 1716 issued a decree which outlined the areas of Chianti in Tuscany suitable for wine production. We missed the sneak peek of the Vernaccia di San Gimignano and we will miss the Welcome Brunello event. However, it is still a quite good track record.

Here I will not delve deeper into each wine tasted and describe a lot of tasting notes, rather I will only mention some few wines and also talk a bit about the experience and fun of attending these anteprime with friends and fellow sommeliers. Then if you like the article and want to read more, sign up for my newsletter to the right here!

Here I wanted to start at the stand of the Consorzio Montecucco as I had already gotten to know one of their producers, Azienda Vinicola toscana Basile, as well as their PR responsible via La Divina Enoteca. Furthermore, Consorzio Montecucco had been so kind to give me a pass to enter the event. However, when I arrived their stand was very crowded so instead I started out at the Consorzio Vini di Carmignano where I tasted, among other wines, the Barco Reale Rosato Doc Vin Ruspo 2015 from Villa Cappezzana. It is made of 80% Sangiovese, 10% Cabernet Sauvignon and 10% Canaiolo. The short contact with the grape skins during the fermentation gives this rosato wine its copper or smoked salmon-like color. It is a fresh wine with notes of both flowers and fruit, and a fellow sommelier friend said she could feel hints of exotic fruits specifically. 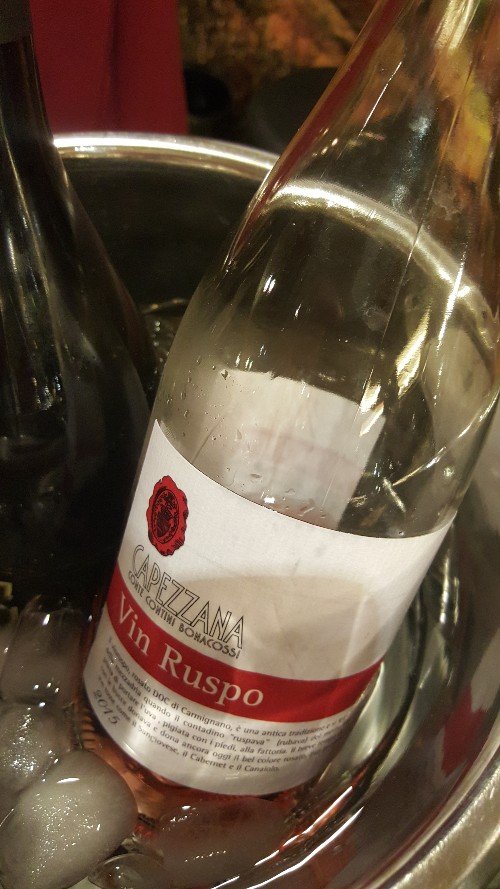 Then I continued to the stand of the Consorzio Vini Cortona where the Fisar Sommelier of the Year, Anna Cardin, was serving and presenting the wines. She was working together with another fellow sommelier friend of mine, Marco Romanelli, from Fisar Firenze. One of the interesting wines I tasted here was the Bramasole Cortona Syrah DOC 2010 from the Fattoria La Braccesca, which is a part of the Antinori family’s estates. It is a 100% Syrah wine and it is aged in barriques of French oak. It has notes of fruit such as prunes, blackberries and other mixed berries, as well as hints of black pepper and tobacco. It is an elegant wine with quite a persistent aftertaste. 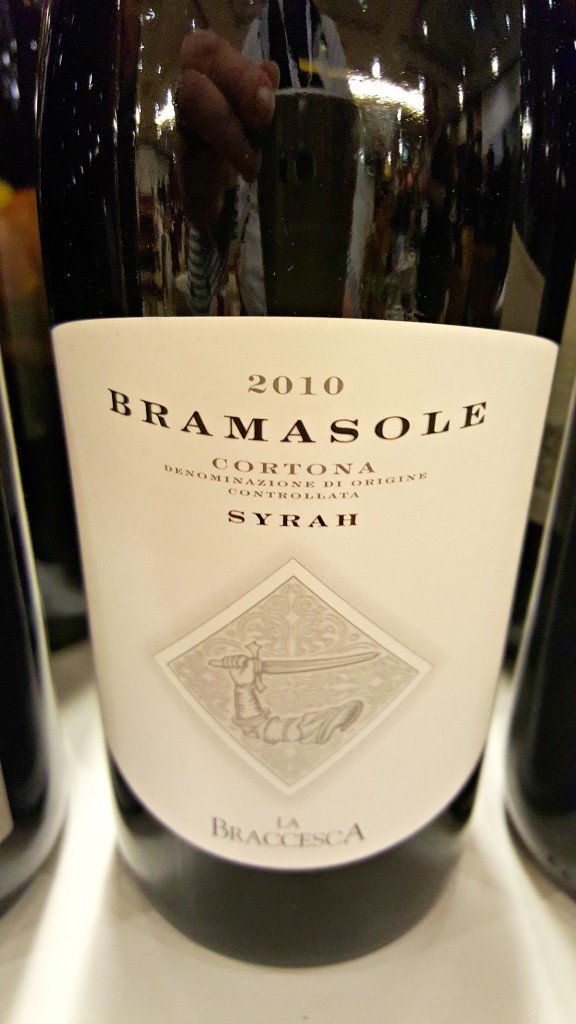 Another different wine I tasted was the I Pampini from Fattoria di Fubbiano at the stand of Colline Lucchesi. It is a blend of the grape varietals Sangiovese and Teroldego, which makes it interesting as a wine in Tuscany. Teroldego is a grape which is cultivated in Trentino normally but at Fattoria di Fubbiano it has been grown for about 40 years. It has aromas of mixed berries as well as spices and tobacco. The aging in barrique gives it the characteristic hint of vanilla. It is a structured and full-bodied wine with non-intrusive tannins. 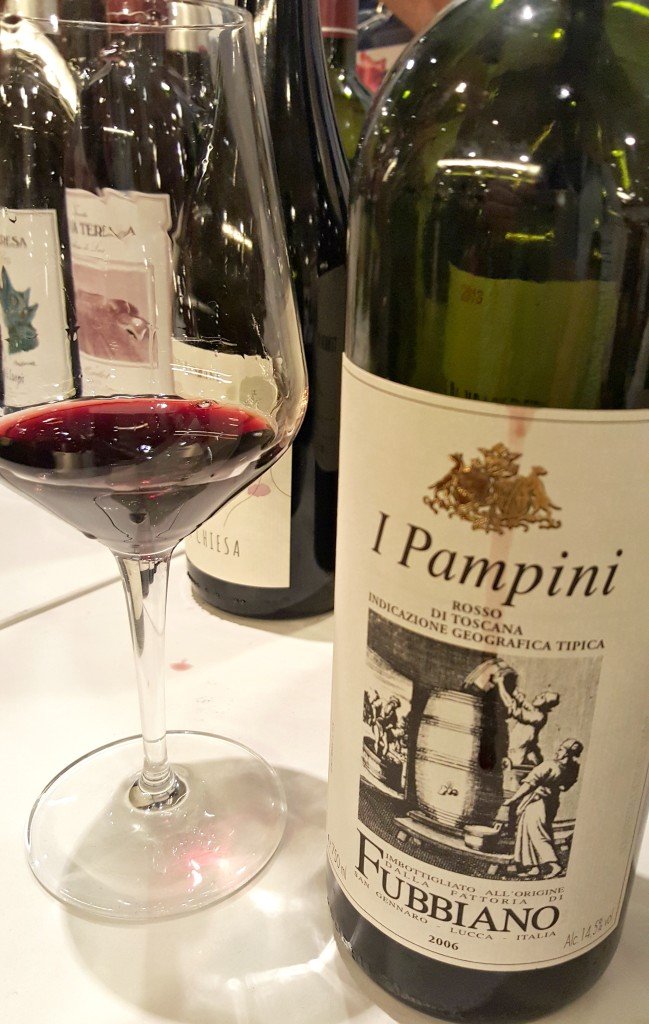 Finally, I arrived at the stand of Consorzio Montecucco where I tasted a lot of the wines and they were all very interesting. Here I cannot name all the wines and their producers, so I have chosen the wine Ad Agio Montecucco Sangiovese Riserva 2011 by Azienda Vinicola toscana Basile which is a 100% Sangiovese wine. The winery is owned by Giovan Battista Basile and is situated in the district of Cinigiano in Maremma. The wine is fruity, full-bodied and well structured, and the tannins are non-invasive and elegant. 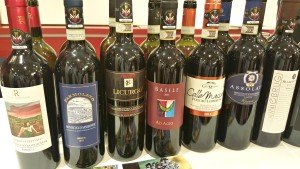 Last Sunday, we were a group of sommeliers Fisar who went to the Chiantilovers event to try out the new Chianti vintages here in Florence. One of the first stops were, of course, at the stand of Azienda Agricola Campochiarenti to say hello to the owner Daniele Rosti. We tried all of his wines while he was telling us a bit about the sample of Chianti 2016, as well as the Chianti Colli Senesi DOCG 2011 and the Riserva DOCG 2007. The Chianti Colli Senesi is made of 85% Sangiovese and then a mix of other native grape varietals such as Colorino, Canaiolo, Ciliegiolo, Mammolo, and Foglia Tonda. The Campochiarenti wines are in general very fruity and fresh, full-bodied and well-structured. 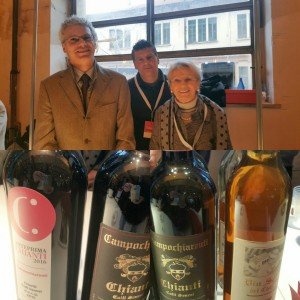 There were so many interesting wineries so it is of course not possible to mention all of them and their fantastic wines here, I will only talk about one or two of those whose wines we tried. One of these producers was Poderi Arcangelo from close to San Gimignano. We tried their sample of Chianti 2016, Chianti 2013 organic wine and Chianti Colli Senesi DOCG 2013 and 2011. Their organic wine is interesting, it is well structured with the typical notes of red fruit but also a hint of spices and under vegetation. 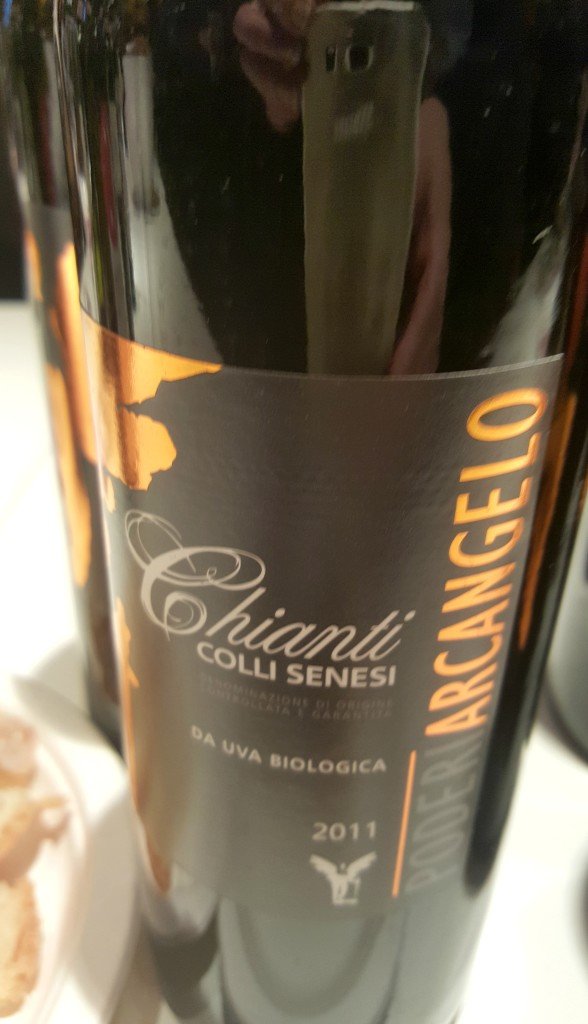 At the stand of Fattoria di Fiano, we tasted, of course, their Ugo Bing Chianti Colli Fiorentini Riserva DOCG 2009 and 2006. It is a blend of Sangiovese, Merlot and Syrah, with notes of prunes and red cherries. It is a full-bodied wine with a long finish. It was their Vin Santo made with a blend of Trebbiano, Malvasia, and San Colombano grapes that really spoke to us. Normally, I am not a big fan of Vin Santo, but there are a few producers of Vin Santo that I really like and Fattoria di Fiano will from now on be one of them. 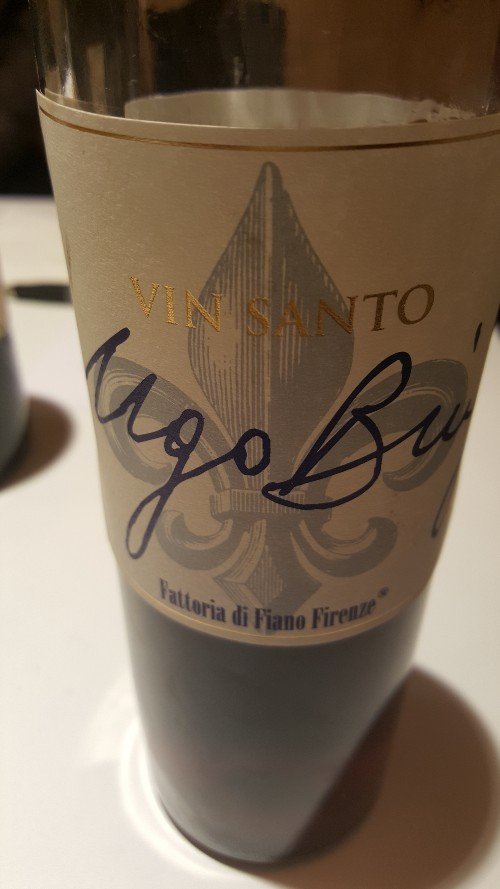 Last, but not least, I went to the presentation of Chianti Classico Collection 2016 last Tuesday at the Stazione Leopolda here in Florence. This year, as mentioned, the consortium also celebrate their 300 year anniversary, well not really the consortium but rather it is 300 years since Cosimo III of Medici decided to outline the borders of the Chianti area. (To read more about Chianti Classico and the legend of the Black Rooster, see the article Words at the Wine Bar – a mini-course.)

Here I started by tasting the wines of Fattoria Santo Stefano close to Greve in Chianti. They have 20 hectares (around 50 acres) of vineyard and produce around 60,000 bottles a year. I tasted their sample of Chianti Classico Annata DOCG 2013 which is made of Sangiovese and Canaiolo, and their Riserva Drugo Chianti Classico Riserva DOCG 2013. The Chianti Classico is fresh with a good level of acidity and has a classic fruity taste. The Drugo, which is made of 90% Sangiovese and 10% Cabernet Sauvignon and Merlot, is aged in big wood casks for 24 months and then 3 months in the bottle. 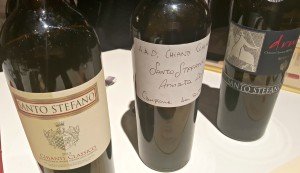 After that Nadia joined me, we continued our tasting tour with the wines from Azienda Agricola Monteraponi, which is a farm and winery situated in Radda in Chianti. We tasted first their Chianti Classico Annata DOCG 2014, a classic wine with 95% Sangiovese and 5% Canaiolo, with its notes of violet and raspberry as well as black pepper. It is a wine with elegant tannins and a long aftertaste. Thereafter, I tasted their Baron’ UGO Toscana Rosso IGT 2012, a new and very interesting Sangiovese wine from their winery. 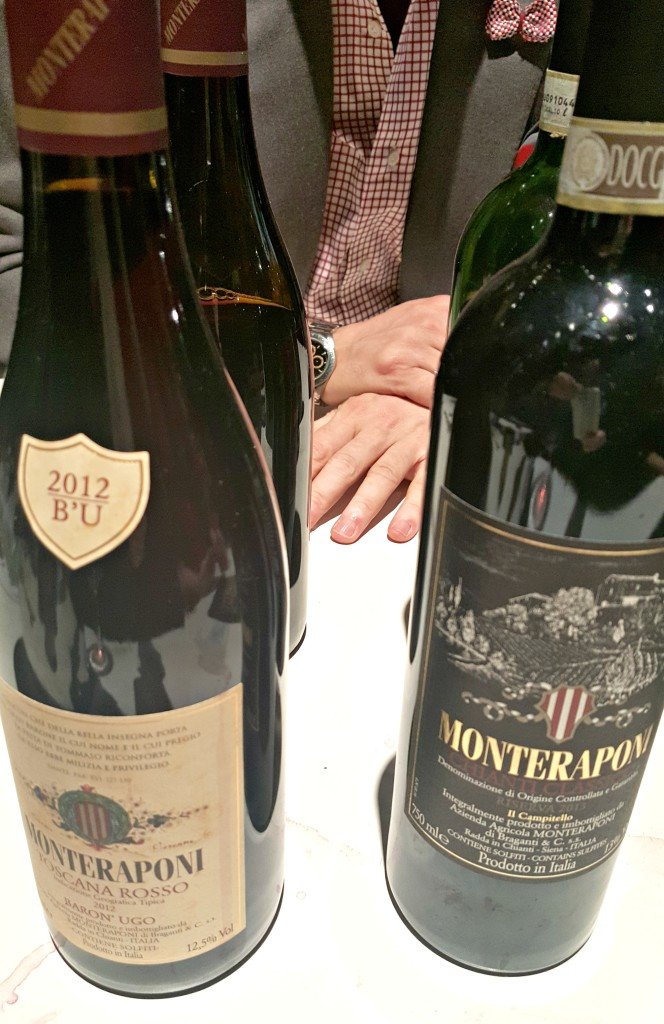 The last wine I will mention here is from the small winery Podere Capaccia which is also situated on the hills near Radda in Chianti. It is a winery which fell into disuse after WWII and was then restored only in the 1970s. Today the owner is Belgian and at the Stazione Leopolda we met and talked to their winemaker Alyson Morgan. Of course, I straight away asked her if she would like to be a guest at my #WinesOfItaly Blab. They produce Chianti Classico wines with a clean character and delicate fruity notes as well as taste. Generally, I am very fond of the Chianti Classico wines from the area around Radda in Chianti lately, thanks to their clean and delicate traits, especially after my visit to the winery Val delle Corti a couple of months ago. We tasted all of the wines that they presented last week, and especially I liked the Chianti Classico Riserva DOCG 2011 with its rich notes of black cherries, as well as spices and vanilla. This is a wine made of 95% Sangiovese and 5% Ancellotta. 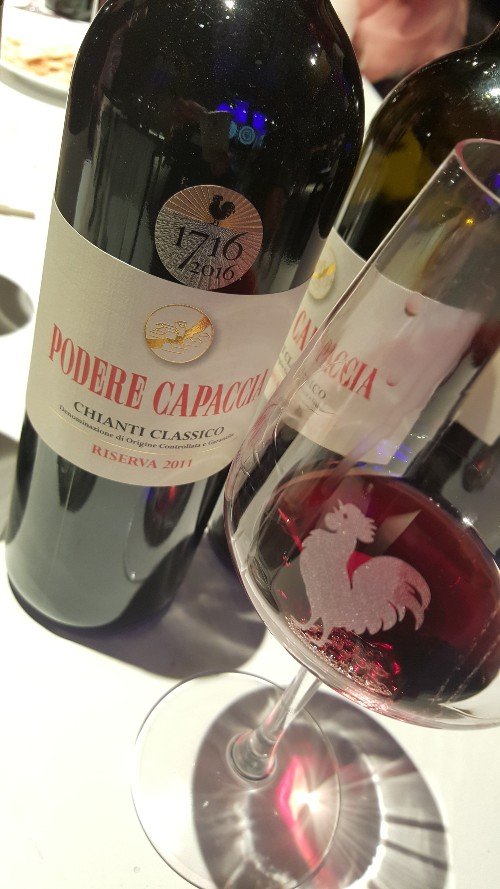 To attended anteprime is always a good opportunity to taste a lot of wines from different producers and to learn more about different production areas. Even though I live in Tuscany and come in contact with a lot of Sangiovese wines, there are still so many areas I only have a theoretic knowledge about not yet having had the occasion to taste the wines. Furthermore, you can talk to the producers or their staff directly and learn a lot about the vintages and their production. For aspiring as well as new sommeliers it is thus a good way to learn more and network with each other too.