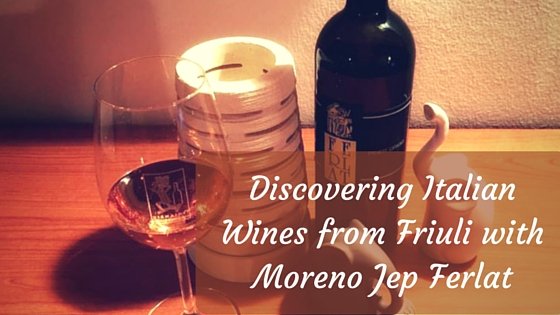 At #WinesOfItaly Blab on Tuesday, January 19th, my guest was Moreno Jep Ferlat from Ferlat Vini in Cormons, Friuli Venezia Giulia. He studied winemaking already at high school and then also at university, graduating in oenology. He has gained experience working in different areas in Italy and he also went to South Africa to work with winemaking there for a period. He now works at the well-known winery Livio Felluga and is also a winemaker at the own family winery Ferlat Vini in Cormons, where he works together with his father and grandfather. Ferlat Vini is a member of FIVI (the Italian Federation for Independent Winemakers).

Friuli Venezia Giulia is a region that is well-known for its white wines. Generally, in Friuli, one produces wine on the basis of international grapes such as Pinot Grigio, Chardonnay and Sauvignon. Pinot Grigio is a grape varietal with French origin, which is now grown all over the world. In Italy, it was for many years mostly produced in Veneto and in Trentino, but of course also in Friuli Venezia Giulia. Chardonnay and Sauvignon are two of the most cultivated grape varietals in the world. The Chardonnay has its origin in the Bourgogne region, while the origin of the Sauvignon, is more in the Bourdeaux region, especially the Sauterne area. When it comes to Italy, both grape varietals are mainly grown in the northern parts of Italy, such as Friuli, Veneto, Trentino, among others.

Returning to talk about Friuli, there are also the native grapes, such as Friulano, Malvasia Istriana, and Ribolla Gialla. Friuliano, which before was called Tocai, is a very old grape varietal and one believes that it was brought to Friuli from Hungary. In 2008, the European Court of Justice ruled in favor of Hungary as the only country from then on having the right to use the name Tokai for this wine. Thus, in Friuli, they could no longer use the name Tocai Friulano, but it became Friulano or Tai, as this wine is called in Veneto. The Ribolla Gialla is a native grape which is mostly grown on the hills between Gorizia and Udine. Here Moreno mentioned that the trendy thing in Friuli for the moment is to make prosecco and sparkling wine on Ribolla Gialla. The Malvasia Istriana is a variation of the Malvasia grape varietal which seems to have its origin in the southern part of Ancient Greece. 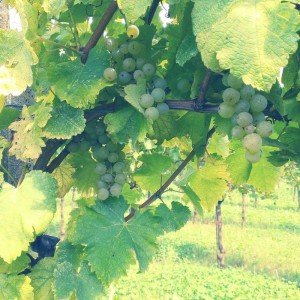 At Ferlat Vini, they have 5 hectares and make six different types of wines, of which 80% white wines and 20% red wines. More specifically, they make Friulano, Sauvignon, Grame (100% Malvasia Istriana) and Pint Grigio. Regarding the red wines, they make Merlot and Cabernet Franc, which historically are produced in his area around Cormons. There are other native grapes that are grown in other areas of Friuli, such as Refosco, Pignolo (a grape with which you can make wines with a long aging potential), Schioppettino (typical in a small area in the east of Friuli), and Terrano (a sub-varietal of the Refosco).

A bit about vinification processes…

Some questions from the fellow blabbers

First out was Martin Rance, who interacted by saying that he went to visit Moreno and his winery some weeks before. He then tried Moreno’s Friulano wine and he believes that it is a wine which is having a come back for the moment in Friuli. He also commented on the fact that there seem to be quite a few young winemakers trying to experiment with the making of Friulano wines.

Regarding the aging potential

Here Daniele Rosti from Azienda Agricola Campochiarenti had another question regarding what aging potential Moreno looks for in his white wines. At another blab where Monica Bianciardi was a guest talking about the aging of white wines, she stressed that Malvasia Istriana is a grape with great aging potential.

Moreno agreed here saying that not only Malvasia Istriana but also the Friulano have good aging potentials. Here he took a wine tasting he did with different vintages of his Friulano wines in Milan as an example, saying that he had brought a Friulano from 2002 to the wine tasting and that it was incredible. According to him, at that wine tasting the vintages 2002 and 2008 were the two top wines. He, furthermore, explained that 2002 was a very rainy year in Friuli, giving a lot of acidity to the wine and, in turn, a lot of aging potential to the wine. On the other hand, 2008 was a great year in Friuli. Moreno here explained that he thinks 10 to 12 years is a quite normal aging period for their white wines, during some years the aging potential can be even longer also. Here he gave some examples of wineries in Friuli, for example, Borgo del Tiglio or Ronco del Gelso, making wines and investing in the aging of their white wines.

There was yet another question where Daniele Rosti wondered whether Moreno uses oak for the aging of their white wines.

Moreno replied that he uses tonneaux (5-7 hl) in French oak for the aging of the red wines, but regarding the white wines then only for the Malvasia Istriana where he uses old French oak barrels. He does not use acacia, here he stated that acacia is mostly used for Verduzzo and Picolit in Friuli.

The Characteristics of the Ferlat Wines

Moreno started out by describing his Pinot Grigio wine, saying that his goal is to produce a “party wine”, i.e. a more funny wine than the general quite mainstream Pino Grigio in Friuli. This means that he wants to make a lighter, very fresh Pinot Grigio with notes of blueberry, wild strawberries, and white peach. Its color is generally copper- or salmon-like. He continued by describing his Sauvignon wine, saying that it is very atypical for his area in Friuli. He produces a more Loire style Sauvignon because he does not particularly like the green flavors in a Sauvignon. He rather prefers more tropical and exotic, as well as ripe fruit in his white wines. For example, apricot, peach, passion fruit, and mango are the flavors he tries to bring out in this wine. He combines an early and late harvest of the Sauvignon, in order to from the early more green harvest get the notes of flint, and a bit smoked tendency, while the second harvest brings out the more fruity notes. The Friulano is very different from the two above mentioned wines, according to Moreno, because it has a lower acidity level but is more full-bodied as a wine. The flavors are also different and not as easily recognizable having more notes of dry fruit, dried flowers, and a slight aftertaste of almonds. It is a very drinkable and pleasant wine and pairs very well with the dishes from Friuli, such as San Daniele ham.

For the Pinot Grigio, according to Moreno, the perfect image is a young couple, at the seaside with a bottle of Ferlat Vini’s Pinot Grigio, which they share together for the aperitif. Of course finishing the bottle… The Sauvignon is also perfect for an aperitif together with fried shrimps or calamari, for example, and for all vegetarians, with vegetables in tempura or similar. It also pairs well with a risotto with asparagus, or another light risotto or pasta dish. The Friulano pairs well with light first courses, such as pasta dishes or ham and different types of cheese. Malvasia Istriana can be paired with more structured first courses or second courses with more oily fish with a tasty sauce. Also Thai and Asian food in general pairs well with the Malvasia wine.

This was a very interesting and fun wine blab. I learned a lot by listening to Moreno, there were a lot of interesting questions during the blab from fellow blabbers, so it was overall a great evening. And for those of you who could not be there and listen on January 19th, you can listen to this #WinesOfItaly session below. To get the latest news about wine blabs and other wine news, feel free to sign up for my newsletter to the right here.