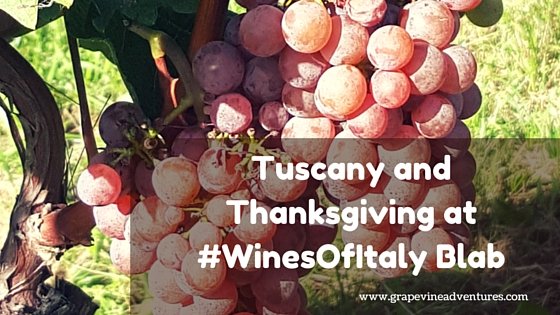 Last night we had our first #WinesOfItaly Blab, and apart from a couple of smaller glitches it went quite well for being the first time I hosted a blab on my own. I am very happy about and grateful to the people who joined the discussion yesterday, and I hope you will all come back next Tuesday and that I will become better and better as a host. Hopefully, Valentina Mecca will be there too then, helping out a bit as cohost. Yesterday, we discussed Tuscany and the specific traits of the wines produced by Azienda Agricola Sagrona as well as wine pairing for Thanksgiving.

Montefioralle in Tuscany and Sagrona Winery

He then continued to describe his wine as quite fruity when it is young, and after hand as it ages more floral notes comes through. For refinement of the wine, they use wooden barrels and not barrique, which gives the wine a more traditional Sangiovese and Chianti Classico character with less notes of vanilla and oak. The use of grapes such as Cabernet Sauvignon and Merlot, is also a way to satisfy a more international taste as it makes the Chianti Classico a bit softer around the edges in comparison to a 100% Sangiovese wine. Furthermore, it also gives the wine a more rich colour.

During the second half of the blab, we talked about possible wine and food pairings for the upcoming Thanksgiving holiday in the US. This was followed by other interesting questions from the fellow blabbers. Some Wine 101 questions for ex. about the right temperature of the wine and the difference between DOCG and DOC categories in Italy. And should you chill a red wine? Here, Kelly Hungerford also jumped in with the interesting question about the use of social media among wine producers in Italy and what effect it has on finding new potential clients.

Regarding the wine pairings, Leonardo Manetti suggested his own Chianti Classico, a Rosso di Montepulciano or a Nobile di Montepulciano for the turkey at Thanksgiving. He also thought a nice white wine from Alto Adige could pair well with the turkey. Martin Rance proposed a Verdicchio from Le Marche as a good choice with the turkey based dinner. Somebody started discussing what wine to pair with Parmigiana di melanzane, and we proposed a regional pairing here with a Primitivo and someone else thought a Pinot Nero from Trentino-Alto Adige might be another good choice. For the pumpkin pie, the discussion got vivid in the chat as Valerie Caruso suggested a Picolit and someone else a Prosecco or a Franciacorta (not Brut, though), while another blabber was contrary to the above-mentioned wines and suggested a Moscato d’Asti as a possible pairing.

Our WinesOfItaly Blab will be back next Tuesday at the same time, 9 pm CET / 3 pm ET / 12 pm PT. Soon I will get back to you with the topic for next week and the blab guest. Stay tuned!