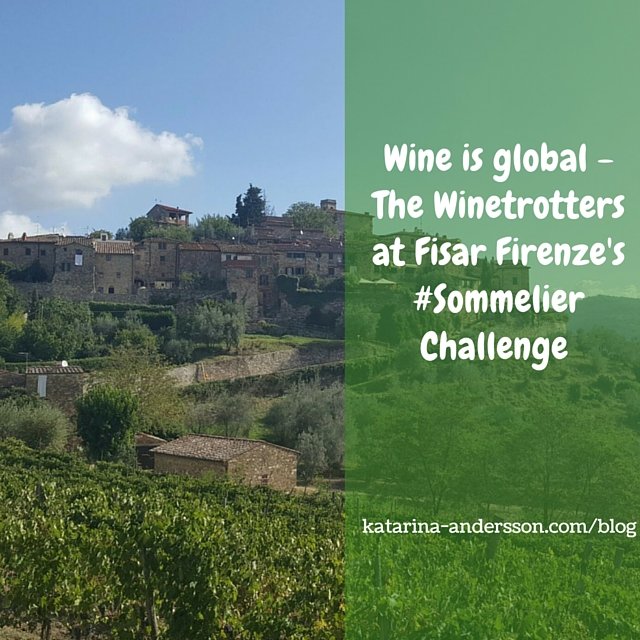 Today at the yearly Sommelier Challenge of Fisar Firenze our team, The Winetrotters, won and took home the ‘gold medal‘ so to say. So, sorry if the first part of this post will talk a lot about ‘our team’ and our victory in this wine competition which is mostly for fun and an excuse to meet, chat and eat and drink wine together. LOL! The second part of the article will be more dedicated to the lunch and the wine that was paired with the different dishes. Read on to find out more about the sommelier challenge and the following lunch…

This concept of organizing a sommelier challenge day to promote team building within our sommelier association Fisar Firenze, started out last year. It is a fun way to help build up the team spirit in the association and to help the sommelier students on different levels to feel that they indeed are a part of the organisation, even if they still have not taken the final sommelier exam. For those of us who already are sommeliers it is a good way to keep on learning, as well as having an excuse for meeting up, tasting and discussing wine further. This competition took place at Azienda Agricola Montefioralle which belongs to Lorenzo Sieni’s family. Lorenzo is the president of the Fisar Firenze delegation.

Before the Sommelier Challenge was to start the participants were waiting outside excited about the competition.

The questions during the competition ranged from blind tasting of wines and guessing the correct grape varieties, DOC or DOCG denomination, to recognizing the authors of wine quotes, solving word puzzles and arriving at the correct wine it alluded to, knowing what wines were had in which film, and relating grape varieties to the correct wine region, etc. All under the supervision of the Sommelier Challenge referees Livio Del Chiaro, Bianca Ciatti and Marco Romanelli. A complete description of all the six teams can be found at Fisar Firenze’s Facebook page, where you also can follow the day in pictures. The teams had chosen names such as Surlì or Nasco Vincente.

An example of the questions they had prepared for us was: Which vine variety is the most appreciated and admired on the beaches of Fregene?* Would you know the answer to this one? See below at the end of this article for the correct answer.

The thrill of competition

After each session of questions, we were informed of the ‘half-time results’ so to say. However, we were sure after each session that we had fallen down from a first to a third or fourth place, as we thought we had not really given any good answers at several questions. Regarding me and Nadia, we were in a team last year that ended up last so we were happy just to participate and at least take home fifth place among the six teams. 🙂 Anyway, after the third and last round of questions we had to wait in suspense for the results until dessert time and the following prize ceremony.

Lunch with a view of the vineyard

The Sommelier Challenge ended just in time for lunch. So we headed out to the tables under the pergola with a fantastic view of the Montefioralle vineyards. We started with antipasti with prosciutto, lardo, cheese and bread. This was paired with a Jean Baillette-Prudhomme Premier Cru à Trois-Puits, Brut réserve.

The antipasti were followed by homemade ravioli di burrata e ricotta di bufala and a sauce of fresh tomatoes which was paired with a Voglar Sauvignon Alto Adige 2012 from the wine producer Peter Dipoli. The present owner Peter Dipoli bought the wine estate in 1987 and started growing Sauvignon Blanc instead of Schiava, which was previously grown, on the land. He writes that his aim is to produce a Sauvignon wine with a full-bodied and structured acidity which is suited for ageing. He also strives to produce a wine with aromas of tropical fruits, rather than vegetal traits. This 2012 version is still a very young wine with a lot of promise for the future.

The second course was arista di maiale lardellata in crosta and sausages that had been grilled in the wood oven they have outdoors, with roasted potatoes as a side dish. This was paired with Montefioralle Chianti Classico 2012 and Monteficalle IGT 2012. The Chianti Classico is a blend of Sangiovese, Canaiolo and Colorino. It is a wine with a ruby red hue and the typical Chianti Classico traits with aromas of mature, red fruit. The Monteficalle IGT is a blend of Merlot and Cabernet Sauvignon and a smaller percentage of Sangiovese. It is a ruby red wine with notes of violet, spices, cocoa and coffee, and it has a complex structure of tannins. It is a precious wine and they only produce 900 bottles a year.

We were at the table with Lorenzo’s father Fernando, and the highlight of the dessert was when he went to get a bottle of Vin Santo del Castello di Uzzano from 1960 that a friend of his had given him years ago. After 55 years, it still had a very smooth and honey like taste. It was paired with the yummy dessert profiterol al cocciolato e al pistacchio di Bronte. This Vin Santo is a real gem among sweet wines, we thank Fernando for having shared this fantastic bottle with us.

At dessert time, it was time for announcing the winners and we were convinced we would end up on a third or fourth place, so we followed with calm excitement which team of friends would be the winners. However, when they announced the third, and then the second place teams, and we had still not been called, we sort of understood we had actually won. This was so cool! We, of course, thank Martin and Damiano for having teamed up with me and Nadia, creating a winning combination. This year Fisar Firenze had even prepared real medals from bronze to silver and gold. So we got the gold medals together with 2 bottles of wine each as a prize.

Today was a fabulous day with a lot of fun, great food and wonderful wine together with our fellow sommelier friends. The weather was fantastic too. So we, of course, thank Lorenzo, Laura, Livio, Bianca and Marco and all the others in Fisar Firenze for having had this great idea to organize a sommelier challenge.

Have you participated in any similar wine competition?

*Answer to the question: Bellone. A vine variety from Lazio.

14 thoughts on “Wine is global – The Winetrotters at a SommelierChallenge”