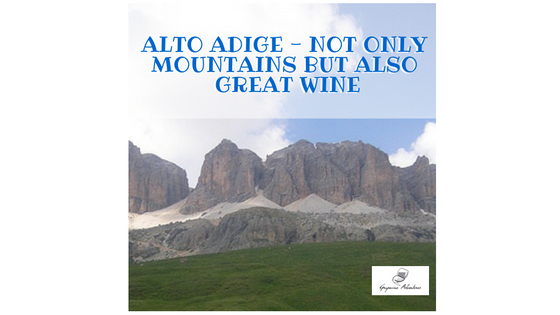 Last week I held my second mini-lesson about wine in Florence, at Uva Nera, where we mainly discussed the wine region Trentino-Alto Adige. The group that had gathered for the evening was very interactive and fun to discuss wine with. As usual we alternated wine info with wine tasting. Mainly, I talked about the history of this most northern wine region in Italy, about its specific native grapes, the different DOCs of the region, and – Trento DOC – the own “spumante” of Trentino-Alto Adige. 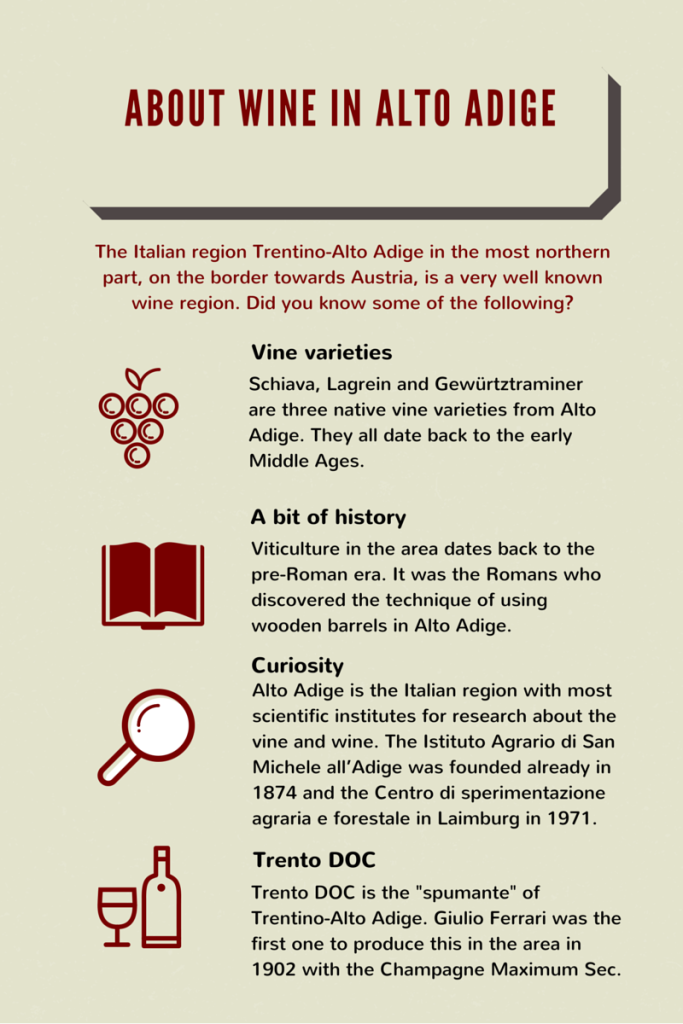 Did you know that it was “Frankish” (from the Kingdom of the Franks, later France) and Bavarian monasteries, mostly Benedictine monasteries, that started buying up land in Alto Adige in the VIII century. The climate was more suitable for viticulture in this region. They also started giving names such as “Traminer” to their wines. Indeed, it was the Benedictine monks who continued their endless work with viticulture and to make wines such as Schiava, Teroldego, Traminer and Marzemino well-known also outside the borders of this region up until the Napoleonic era. Marzemino was, for example, one of Wolfgang Amadeus Mozart’s favorite wines.

Wine tasting with Lagrein and Kerner

During this mini-lesson we tasted two wines from Trentino-Alto Adige, a Kerner (white wine) and a Lagrein (red wine). The Kerner grape is a crossing between Trollinger (a red variety also known as Schiava) and Riesling. It was bred in 1929 by a German, August Herold, who was working at a plant breeding station close to Württemberg in Germany. The grape was named after the Swabian poet Justinus Kerner.

Our first wine of the evening was thus a Kerner from the producer Taschlerhof. It is a wine with a straw-yellow hue. It is a very aromatic and fresh wine with aromas of white fruits (peach), citrus fruits, as well as a herbal note. Furthermore, it is a wine that feels rich and full-bodied in the mouth, with a mineral undertone and a hint of Muscat.

The second wine of the evening was a Lagrein from the producer Tiefenbrunner. It is a wine with aromas of black cherry, violet and licorice. It also has a taste of red and black cherries, licorice and tobacco. You can also feel a note of wood in the flavour as well as an elegant touch of tannins.

Words at the Wine Bar – next mini-lessons

Next lesson will be held by Nadia, because I will be away in Cilento, more precisely in Santa Maria di Castellabate to enjoy some sun at the beach. 🙂 She will probably focus on Piemonte this time, so you will hear more about this in one of my next blog posts.