The title might sound odd to you. So, you all know by now that I am into wine and food, being a Swedish wino, sommelier, and translator in Florence. You might have read some of my posts about wine tastings and local food from Calabria to Lombardy. But what has wine to do with Vikings? You might also wonder what Human to Human and the Bewizard conference is, right? Even to me it was quite unknown concepts until a while ago. 😉 Below it will all be clear to you, just wait and see…

Arriving at Rimini, in need of wine

As always when you are in a hurry, Murphy’s Law kicks in. This, of course, happened Thursday evening when I finished work late, could not find a taxi, dragged my trolley on the bus, arrived to the train station in Florence, only to discover that all trains were very much delayed due to system failure somewhere towards Rome. Somehow I managed to get to Rimini. Upon arrival, I instantly got in a good mood thanks to the very friendly receptionist at Hotel Villa Adriatica. Another contributing factor was the glass of white wine, filled to the brim, in the restaurant next door to the hotel. So as every story on my blog, it all starts and, most often ends with wine!

Bewizard is a web-marketing event that is organized every year (in the beginning every second year) in Rimini since 2008. Up until 2 weeks ago I had never heard of it, not really being in the web-marketing sector professionally. However, by chance on Twitter, thanks to some lovely people I have ended up connecting and chatting with without in the beginning knowing much who they were, I was introduced to the Bewizard event. 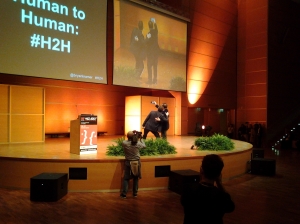 Tweeting actively about wine, translation, and sport you get in contact with some great people, ending up in interesting conversations. Three of these people, with whom I mostly tweet about wine every now and then, are Robert Moore, Courtney Smith Kramer, and Bryan Kramer. In the beginning, I looked them up and realized they had a huge amount of followers, are working in fields related to social media, but did not really think much more of it other than it is really nice tweeting with them. After a while I started following their blogs and podcasts, realizing I was learning a lot from them about how to become better at using social media for my translation business. When Robert Moore tweeted that Bryan Kramer would be speaking in Rimini, I was thinking about going. I was supposed to be first at Vinitaly and then, shortly thereafter, in Calabria visiting friends though, but when the plans as always here changed I decided I would go to Rimini. I was very curious to find out more about these people, and who knows, to perhaps meet them in person.

Human to Human with Bryan Kramer

When entering the congress hall on Friday morning, I started feeling completely out of place and thinking about what I was doing there. I had no clue what to talk to people about, thinking I had nothing in common with them. What do I know about web marketing? So I headed directly for the morning session, having read up on the program and the talks. They all turned out to be very interesting and my analytical and critical side as a former historian and academic came out, becoming ever more intrigued. It was just what I had been looking for to better understand how to use social media. Bryan Kramer talked about the concept launched by him: Human to Human (#H2H) and how you need to be authentic in everything you do, to engage with people around things you have in common. His three key concepts for bringing back the human side of communication are: simplicity, empathy, and imperfection. These are all concepts I find very interesting and useful.

Julius van de Laar talked about his experience as a strategist for Barack Obama’s election campaigns. He emphasized how the context is everything and that the message you are pushing out matters. Also in politics, being authentic, showing empathy and how you care about people is central for the outcome on social media.

The scary side of networking

How is it that when you are sure of yourself and in situations where you feel like you have a common ground to stand upon, networking is not very scary or difficult? Normally, that is how I am, quite chatty, ironic, and easygoing. I have no problem talking in front of an audience, thrived on teaching at university, and considered it nothing complicated to ask a question at the Bewizard event in front of everybody. However, to go and present myself and say hi to some of the speakers, then everything instantly changed! I felt like a shy translator geek. This is how it felt most of the Friday at the event. As I had been in contact on Twitter for a while with Bryan Kramer and Courtney Smith, I had the intention to go and say hi to them. However, I turned into this shy and procrastinating person, seeing them walk around but thinking that they probably would only find me annoying. At the party in the evening, I tried to arm myself with confidence and go over to the speakers’ table, but of course I chickened out several times, felt like a weird stalker, and went back to the hotel. Not even meeting some really nice people at the party had given me enough confidence. Enough is enough, so I decided the next day would be totally different!

A new day, with new possibilities

Saturday morning I went directly to listen to another talk by Bryan Kramer, which I enjoyed very much too. He has a way of explaining everything in a relaxed way, keeping it simple by giving concrete examples and being extremely Human to Human and down to earth with everybody. Feeling more like myself again, I even asked a question, when he recognized me and I finally said hi to him. After all it was not as scary as I thought. 😉 My only regret is that I missed Courtney Smith by being too shy the day before.

At one point during the event I started getting tweets from one of the interpreters that I am friends with on Facebook, but had actually never met in person yet. She was asking if I were in one of the sessions where they were talking about e-Commerce and wine. So I tried to chase down the wine talk later on, but it was already over. Here, in my own stupidity, I was thinking it was all very bizarre. How on earth could she know that I am obsessed with wine? Of course, when we met, it turned out she had read this wine blog and followed my Facebook wall. Here I was always thinking that not many people actually read my blog, and instead I find out that people know me for my wine interest, not so much about me being a translator. How cool is that! Well, of course, it would be cooler if it all lead to a connection between wine and translation work.

Saturday after having listened also to Paolo Zanzottera and Fabio Sutto, in the afternoon I went to listen to the e-Commerce talks, thinking I would learn something completely new. First out was a quite young guy, Stefan Jørgensen, talking about his path from a start-up to a very successful e-commerce company in Germany, namely Itembase. How he went to San Francisco for the elevator pitch, and how he thought the Americans were wild when they told him to wear a Viking helmet to play on his first project name and origin. Listening to his accent, I was convinced he was Danish, which in the end turned out to be true. I raised my hand to ask a question, and to compliment him, saying that I am from close to Malmö, and thus we are almost co-nationals. He then asked me if I wanted to wear the Viking helmet… Danish people are as always so witty and extremely friendly. Almost like us Swedes from Skåne… 😉

After the Danish talk, a German couple attending the event, came up to present themselves, asking what a Swede from Malmö is doing at a web-marketing event in Rimini? Chatting and exchanging contact details, we then continued on to different event sessions. Afterwards, I was thinking that if I would have known it was enough to start asking questions at the different talks to get to know people, I would have done that from the start… At least one always learns something new! 🙂

Written by Katarina Andersson and proofread by Susie Holman.

19 thoughts on “Wine, Vikings, and Human to Human, at BeWizard”