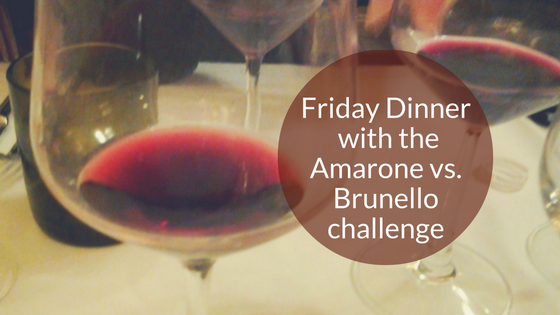 For those of you who still have not been to Trattoria Da Burde in via Pistoiese 154, at the outskirts of Florence, you should really try it out. So if you are soon travelling to Florence, you should definitely go to one of their Friday evening dinners, which are always organized around a wine tasting theme. The Gori family with the brothers Andrea (the Sommelier), Paolo (the Chef), and their mother Evelina (the Woman behind the success) are really sweet and always make you feel like at home. Even though it is quite far from the centre, you can take the bus 35 or a taxi, and it is really worth the extra fare.

Anyway, with a friend of mine, Silvia, being here for a week to visit, we decided to go to Da Burde yesterday and the dinner with the Amarone vs. Brunello challenge. The wines were Rosso di Montalcino DOC 2012 and Brunello di Montalcino DOCG 2009 Tenuta Nuova from Casanova di Neri versus Palazzo della Torre IGT 2011, Amarone della Valpolicella Classico DOC 2009 and Giovanni Allegrini Recioto della Valpolicella Classico DOCG 2010 from Allegrini.

First on the menu, was a delicious torta salata with pumpkin and amaretti which was served together with the Rosso di Montalcino DOC 2012. This red Sangiovese wine has a fruity aroma, mainly of marasca cherry and other red fruits, as well as a flowery aroma dominated by violet.

The Rosso di Montalcino DOC 2012 above was a promising prelude to the protagonist of the evening, namely the Brunello di Montalcino DOCG 2009 Tenuta Nuova. Apologies to Allegrini and their fantastic Amarone, but last night we were completely blown away by the Brunello from Casanova di Neri. The owner, Giacomo Neri, who got awarded 100/100 points by Wine Spectator for the Brunello di Montalcino DOCG 2001 Tenuta Nuova and since then is consistently among the top wines on Wine Spectator’s list of reds, was present himself yesterday to talk about his wines. He defined aromas such as la macchia mediterranea, red fruits (marasca cherry), the flowery aromas of violet, juniper, and the ‘herby’ aromas of rosemary and laurel. For me, I did not manage to feel any rosemary with my nose, so I guess I have to practice more and taste more wines. 😉 This 2009 Brunello has a good structure, but of course it will be even better in 10-15 years time.

Liking this wine so much I finished it quite quickly, while Silvia possessively held on to the glass to be able to slowly savor it sip by sip…

The Amarone della Valpolicella Classico DOC 2009 and Brunello di Montalcino DOCG 2009 Tenuta Nuova were served together with the main dish Peposo di razza Calvana, where the meat was so tender that it almost melted in the mouth.

As mentioned above the Amarone from Allegrini has come a bit in the shadow here, even though this Amarone 2009 is an outstanding wine too, with its aromas of ripe fruit as well as a refined level of tannins and acidity. For me, I really liked their sweet wine Giovanni Allegrini Recioto della Valpolicella Classico DOCG 2010 with its aroma of dried fruit and a very rich and elegant taste. Silvia Allegrini, who was also present at the dinner yesterday, talked about how this Recioto can age well and recommended to pair it with cheese or chocolate.

As a comment in defence of the Allegrini family and their excellent wines, in front of a wine such as the Brunello from Casanova di Neri at a dinner in the heart of Tuscany, it would not be easy for any wine from other regions to make its voice heard. 🙂

1 thought on “Friday Dinner with the Amarone vs. Brunello challenge”